James Baldwin wrote about the resistance movements, dissent and humanity of young people. Two of Baldwin’s essays—"The Dangerous Road Before Martin Luther King" and "They Can’t Turn Back"—capture Baldwin’s admiration of the conviction, tenacity, and the American idealism of a younger generation. We celebrate Martin Luther King, Jr. and Coretta Scott King through their shared ability with Baldwin’s to transform what it means to be human into the word, prose, poetry, and art.

This year, NEC is proud to join the City of Boston and Boston University in this year's planning and to also honor Coretta Scott King, who graduated from NEC in 1954. Her passion for music remained throughout her life and played a significant role in her civil rights work. She sang spiritual hymns at events where Martin Luther King, Jr. spoke and conceived and performed the renowned Freedom Concerts, which combined music, prose, and poetry narration.

This annual event has adapted this year to a virtual format with public health and safety guidelines in mind. We invite you to view the full program, featuring live and pre-recorded content, at the link below.

Ibram X. Kendi is a bestselling author, the Andrew W. Mellon Professor in the Humanities at Boston University, and the founding director of the BU Center for Antiracist Research. Professor Kendi is a contributing writer at The Atlantic and a CBS News correspondent. He is also the 2020-2021 Frances B. Cashin Fellow at the Radcliffe Institute for the Advanced Study at Harvard University.

Speakers will also include:

Selections from Baldwin’s essays and introduction of speakers will be done by graduates of Boston Public Schools now attending Boston University and New England Conservatory, including NEC's David Norville. 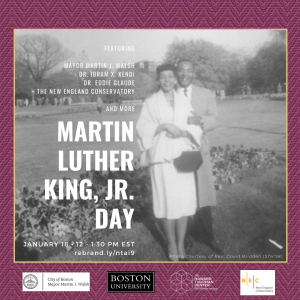