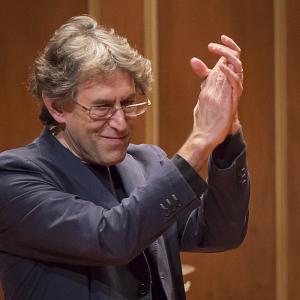 A multi-instrumentalist, composer, and scholar, Hankus Netsky teaches improvisation and Jewish music. He is the founder and director of the Klezmer Conservatory Band, an internationally renowned Yiddish music ensemble. Netsky has previously taught Jewish music at Hebrew College and Wesleyan University, and has lectured extensively in the U.S., Canada, and Europe. Several of his essays on klezmer music have been published by the University of California Press.

Hankus Netsky collaborated with Marty Ehrlich '77 on the August 2010 release Fables, an entry in the "Radical Jewish Culture" collection on John Zorn's Tzadik label. The original compositions that make up this recording represent the intersection of jazz and Jewish musical traditions. Netsky on piano and accordion and Ehrlich on reeds are joined by Jerome Harris '77 on bass and Marcus Rojas '85 on tuba on several tracks.

Netsky has produced numerous other recordings, including almost a dozen by the Klezmer Conservatory Band. He has composed extensively for film and television, and has collaborated with such artists as Itzhak Perlman, Robin Williams, Joel Grey, and Theodore Bikel.

What We Do
Next