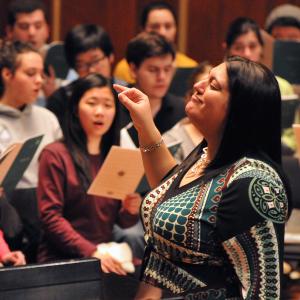 Conductor and mezzo-soprano Erica Washburn has been Director of Choral Activities at New England Conservatory since 2009. Known for her student-centric approach to classroom and rehearsal instruction, and commitment to the performance of new music, she is the recipient of several outstanding alumni awards, including the distinguished honor of induction to the Westminster Choir College Music Education Hall of Fame.

As a conductor, Washburn has worked with Kansas City, MO based Cardinalis, the East Carolina University Women’s Chorale, and the Eastman Women’s Chorus. She is a sought-after guest clinician who frequently leads state and regional festival choruses, and spent five summers as a conductor and voice faculty member for the New York State Summer School of the Arts School of Choral Studies.

Under her direction the NEC choirs have been featured on several live and pre-recorded broadcasts, including the North Carolina based station WCPE Great Sacred Music, WICN Public Radio, and WGBH Boston. The choirs can also be heard in collaboration with the Boston Modern Orchestra Project on the BMOP/Sound recording Paul Moravec: The Blizzard Voices.

Washburn’s stage credits include appearances as Madame Lidoine in Francis Poulenc’s Dialogues of the Carmelites, Rebecca Nurse in Robert Ward’s The Crucible, Mother/Allison in the premiere of Lee Hoiby’s This is the Rill Speaking and others. Her recital and orchestral solo credits are numerous, and her live premiere from Jordan Hall of the late Richard Toensing’s Night Songs and Evening Prayers can be heard on Albany Records, with the New England Conservatory Symphonic Winds.