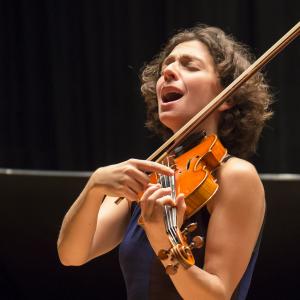 Eden MacAdam-Somer & the Sail Away Ladies on WBUR's Radio Boston

Co-Chair of the Department of Contemporary Improvisation, composer/performer/improviser Eden MacAdam-Somer is one of today’s most exciting and versatile artists. Hailed by the New York Times as reflecting "astonishing virtuosity and raw expression," her music transcends genre through soaring violin, vocals, and percussive dance, weaving in and out of the many cultures that have formed her experience. She has been a featured soloist with symphony and chamber orchestras, jazz and swing bands, and Romanian, Jewish Music, and American folk ensembles. She has been a guest artist at such institutions as the Afghanistan National Institute of Music and the Dundalk Institute of Technology, a featured performer at the Eastbourne, Texas, and Beijing International Music Festivals, and she has toured across the contiguous United States, Alaska, Hawaii, India, Iceland, Europe, the UK, and Afghanistan.

Eden has written numerous works for solo artist on voice, violin, and body percussion, such as Rumi Songs, a partially composed, partially improvised song cycle. Her works are performed internationally, and she has received commissions by such groups as the New Gallery Concert Series, Cuatro Puntos Resident Artists, the Providence Mandolin Orchestra, and the AURA Ensemble. Her 2015 live solo album, My First Love Story, was listed as one of the top ten jazz albums of the year in the Boston Globe.

While growing up in Houston, Texas, Eden studied classical music formally, spending her free time at the local folk music sessions and working as an arranger and studio musician. She attended Houston's High School for Performing and Visual Arts, winning the Music Teacher's National Association State Division and the Lennox Young Artists Competitions. Later, she earned her BM and MM in classical performance from the Moores School of Music at the University of Houston as a student of Fredell Lack, and the Shepherd School of Music at Rice University as a student of Kenneth Goldsmith. In 2013 she became the first DMA graduate of New England Conservatory’s Department of Contemporary Improvisation.

Eden is currently a full-time faculty member at New England Conservatory, where she teaches courses, ensembles, studio lessons, in addition to serving as Co-Chair of the Department of Contemporary Improvisation. A dynamic and passionate teacher, Eden works with each student to attain the skills they need to become creative and successful artists, strengthening unique personal style with a good foundation in aural skills and technical facility. Outside of the classroom, Eden maintains an active, eclectic international performance and recording career as a soloist and with such bands as Notorious Folk and the Klezmer Conservatory Band.

What We Do
Next

The Sail Away Ladies host a Barn Dance