In collaboration with the Strings and Composition departments, NEC's Music Theory department presents a program of contemporary works by women composers of various generations and origins, and features violinist Alex Greffin Klein.

The program will feature works by:

A few notes from Ms. Greffin Klein regarding the program:

The recital Femmes du Monde, 8 short pieces, composed in the last 40 years by women composer of various generations and origins: some of them are already internationally well known, like Kaija Saariaho or Chaya Czernowin, or rising stars, like the Austrian Olga Neuwirth who is currently composing an opera for the Wien Oper and allowed me to transcript for violin her solo viola piece. Ketty Nez's "Fiddler’s songs" was composed especially for this occasion, and it will be the world premiere. I will introduce the pieces with a few words during the concert.

My purpose in creating the program was not at all political. First, I must say that I started working on this program at the end of 2016, more than a year before #metoo movement, and what it meant for the feminist movement.

It started with a conversation I had with a composer friend. I was telling him that I enjoy the first few weeks of learning a new piece when I am alone with it: a sort of tête-à-tête when I am trying to figure out who is the person that is behind. What kind of personality he/she has, his/her qualities, his/her fears, what is important to him/her, his/her weaknesses, insecurities, etc.… As this moment it doesn’t matter whether the composer is alive or dead, it feels like I am having with him one of these «  midnight conversations » in a kitchen with a glass of red wine on what is life all about.

I was telling him it is incredible how much you can learn from someone just from the music itself if you spend enough time with the work and pay enough attention.

This moment is extremely important to me, as I am trying to find resonances in myself, to be the best possible advocate for the piece.

I was telling him it would be even more exciting and fun not to know the name of the composer. Then I would have no bias at all! I was wondering if it could be possible to guess his/her age, his/her nationality, his/her gender???

So we started to talk about women composer:  with very few exceptions, it is quite a modern concept. It is strange to think that, in history, we have traces of women writer, painter, sculptor (even if it was still sometimes quite difficult for them to be taken seriously, or recognized at all), but almost no composer. All the music that we heard imagined by women dates from the last 60? 70? years. Why?

Anyway, that was the start of it. No political statement. Just a curiosity.

As part of a short residency at NEC, Ms. Greffin Klein will also be providing a masterclass on Thursday, October 10.
Artists
Tags
CollegeCompositionMusic TheoryStringsViolin 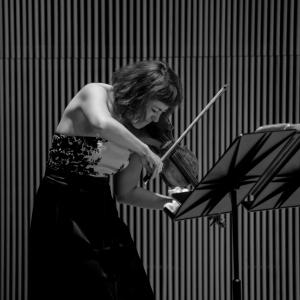 Internationally acclaimed violinist Alex Greffin Klein will present a two-part masterclass on contemporary violin. In the first part, she will discuss performance practices and notations for...