As part of her NEC residency, trailblazing composer, flutist and saxophonist Anna Webber conducts the NEC Jazz Composers' Workshop Orchestra in her recent works for quartet and big band. She also performs with a quartet of jazz department students in a program of music from her recent release IDIOM as well as other small group pieces. Webber’s interests and work live in the aesthetic overlap between avant-garde jazz and new classical music.

All compositions on tonight's program are by Anna Webber.

Anna Webber is a flutist, saxophonist, and composer whose interests and work live in the aesthetic overlap between avant-garde jazz and new classical music. In May 2021 she released Idiom, a double album featuring both a trio and a large ensemble, and a follow-up to her critically-acclaimed release Clockwise. That album, which the Wall Street Journal called "visionary and captivating," was voted #6 Best Album of 2019 in the NPR Jazz Critics Poll, who described it as “heady music [that] appeals to the rest of the body.” Her 2020 release, Both Are True (Greenleaf Music), co-led with saxophonist/composer Angela Morris, was named a top ten best release of 2020 by The New York Times. She was recently named a 2021 Berlin Prize Fellow and was voted the top “Rising Star” flutist in the 2020 Downbeat Critic’s Poll.
The trio featured on Idiom is Webber’s “Simple Trio”, her working band of almost a decade which features drummer John Hollenbeck and pianist Matt Mitchell. A prolific bandleader, Webber also leads a quartet and a septet in addition to the above-mentioned large ensemble and co-led Webber/Morris Big Band. She has performed and/or recorded with projects led by artists such as Dan Weiss, Jen Shyu, Dave Douglas, Matt Mitchell, Ches Smith, John Hollenbeck, and Trevor Dunn, among others.
Webber is a 2018 Guggenheim Fellow. She has additionally been awarded grants from the Copland Fund (2021 & 2019), the Shifting Foundation (2015), and the New York Foundation for the Arts (2017) and residencies from Exploring the Metropolis (2019), the MacDowell Colony (2017 & 2020), the Millay Colony for the Arts (2015), and the Brush Creek Foundation for the Arts (2014). Webber is originally from British Columbia. 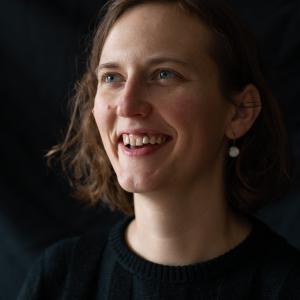