Hear all of Beethoven’s string quartets in a series of 6 concerts in the spring and fall of 2020, presented by NEC's faculty quartet-in-residence, the Borromeo String Quartet. The Quartet will play from the wider range of expressive markings Beethoven included in his handwritten manuscripts, in new editions prepared by violinist Nicholas Kitchen. This series is part of NEC's Beethoven250 series

Each concert is programmed with string quartets from Beethoven’s early, middle, and late periods, allowing the audience to make connections between the range of pieces throughout Beethoven’s life.

Of his research into Beethoven’s expressive markings, Kitchen says,

“Using the computer to always read from full scores, I realized that I could also read off of primary sources such as manuscripts, corrected copies, or contrasting editions. With every composer, this is interesting, but with Beethoven I have found myself compelled to notice and show through new editions an elaborate system of expressive marking that Beethoven used in his manuscripts.

Beethoven used no fewer than 22 levels of dynamics, for example. Because these expressive marks are so vividly marked in the manuscripts, my goal is to make these editions as faithful as I can to the original. 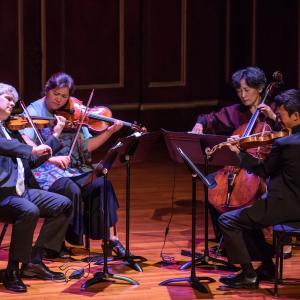 Boston Globe previews Borromeo's Performance of Beethoven's String Quartets
Jeremy Eichler of the Boston Globe previews the Borromeo String Quartet, NEC’s faculty quartet-in-residence, in their six-part series in which the Quartet will play from the wider range of expressive markings Beethoven included in his handwritten manuscripts, in new editions prepared by violinist Nicholas Kitchen.
Top