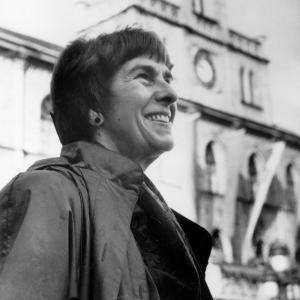 David Dubal in conversation with Veronica Jochum, complete "For the Love of Music" radio broadcast

The daughter of eminent conductor Eugen Jochum (1902-87), German-born pianist Veronica Jochum has been associated with musical greatness since her early childhood. A former student of Josef Benvenuti, Edwin Fischer, and Rudolf Serkin, her illustrious career spans five decades and includes performances in more than 50 countries in collaboration with many of the world's premier orchestras, conductors, and musicians. Critics have called her "an institution at the piano" (Leipziger Volkszeitung), "a splendid pianist" (The New York Times), "a commanding artist" (The Los Angeles Times) and "the last Grande Dame of the piano" (Sueddeutsche Zeitung Muenchen). The German government honored her in 1994 with the Cross of the Order of Merit for her embodiment of the highest traditions of German culture.

In November 2005, Veronica Jochum celebrated her 40th anniversary on the piano faculty at New England Conservatory. Her legacy as an educator at NEC includes co-founding the weekly Fall Semester Piano Performance Seminar in 1988, bringing numerous prominent guests to perform and speak to students, and a list of noteworthy former students including composer Richard Danielpour, David Deveau, Cathy Fuller, Randall Hodgkinson, and David Watkins among many others. Jochum has presented a number of major works in NEC's Jordan Hall over the years, including the world premiere of Donald Harris's Balladen and the American premiere of Gunther Schuller's Piano Concerto No. 2, both of which were written for her. She was honored with a Bunting Institute fellowship from Harvard University in 1996, and in 2002, The Saj-nicole A. Joni and Marya Weinstock Endowed Scholarship was established in her honor on the occasion of her 35th anniversary at NEC.

Jochum has worked under the batons of such conductors as Sir Colin Davis, Lukas Foss, Bernard Haitink, Gunther Schuller, and, of course, her father, and with orchestras including the Berlin Philharmonic, L'Orchestre National de France, the Bavarian Radio Symphony Orchestra, the Boston Symphony Orchestra, London Philharmonic, and Amsterdam Concertgebouw, among others.

In the chamber music setting, she has cooperated with musicians including Colin Carr, Natalia Gutman, Laurence Lesser, Joseph Silverstein, Arnold Steinhardt, Masuko Ushioda, as well as groups such as the Borromeo String Quartet, Berlin Philharmonic's Octet and Philharmonia Quartet, and the Pro Arte Chamber Orchestra of Boston.

Her festival appearances in the United States include the Marlboro, Tanglewood, Spoleto, Sandpoint, Northwest Bach, and Eastern Music festivals, and she has appeared throughout Europe at the Montreux, Mecklenburg, Bregenz, Wallonie, and Salzburg Mozart festivals among others. Her performances and recordings are broadcast regularly on National Public Radio and in Europe.

The widow of the late architect and Harvard University professor Willo von Moltke, and sister-in-law to the famous Nazi resistance figures Freya von Moltke and the late Helmuth James von Moltke, Jochum is dedicated to performing music and supporting causes related to the promotion of peace, reconciliation, and liberation from oppression. She works with a variety of organizations, including the Freya von Moltke Foundation for the New Kreisau, and recently performed selections from Messiaen's Quartet for the End of Time at the site of Stalag 8-A, the Nazi prison camp where it was written and premiered during the composer's captivity there. In 2005, she also performed Karl Amadeus Hartmann's piano sonata in memory of Dachau's liberation both in America and in Europe.

In October 2004, she presented the world premieres of two pieces written in her honor, John McDonald's Zwei Jochums, Op. 350 and MacArthur-winning composer Osvaldo Golijov's first-ever piece for solo piano, Levante: Fantasy on a Chorus from the "St. Mark Passion" in NEC's Jordan Hall. Other highlights of her performance schedule from the past few years include concerts at the Arts & Reconciliation Festival (Pretoria, South Africa) and the American Liszt Society Festival (Lincoln, Nebraska), as well as various concerts and masterclasses in Germany, Poland, and Switzerland. She also performed at Boston's Symphony Hall as part of the celebration of Steinway's 150th anniversary.

Most recently, she has given several concerts in honor of Mozart's 250th birthday, including performances of her program "Mozart: A Journey (Featuring the Music and Letters of W.A. Mozart)" with new translations of letters from Mozart, his friends and family by noted German scholar Robert Spaethling. She has also performed Mozart sonatas for piano and violin with Joseph Silverstein and other Mozart-related events here and abroad. In 2006, she performed a program honoring of the 150th anniversary of Robert Schumann's death that also includes the composer's own writings.

Although her repertoire ranges from Bach to contemporary, she is also associated with composers Ferruccio Busoni, Robert and Clara Schumann, and Johannes Brahms, thanks to her pioneering recordings and the creative themes of her innovative "commentary concerts," which integrate informed discourse with live performance. Jochum has recorded for the Deutsche Grammophon, Philips, Laurel, CRI, GM Recordings, Golden Crest, and Tahra labels, and has recorded the complete music of Clara Schumann for the Swiss label Tudor. Her recently reissued 1988 recording (Tudor 788) of three Clara Schumann pieces led International Record Review's Calum MacDonald to write: "...she dispatches them very capably indeed. The interpretations are affectionate and characterful, nicely shaped."