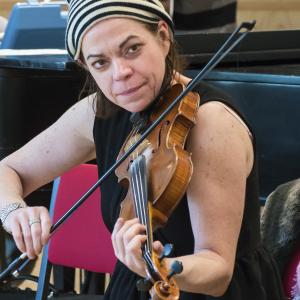 I was born in New York City on the lower west side. My mom and dad are from Arklow, Co. Wicklow in Ireland and a few generations of my dad's family had made their way to the lower west side of Manhattan before him. I grew up on the ocean on the beautiful peninsula of Rockaway Beach, N.Y. I am a beach girl at heart, even though my quest to get a tan and bronzed as a teenager was never realized, because of my Irish DNA!

I started playing irish fiddle and took irish dancing lessons in the bustling irish scene in the 1970s in NY. My first fiddle teacher was the late Mareen Glynn and my dancing theacher was the amazing Donny Golden. These two people shaped my early understanding of music and dance and I would not be where I am today without their influence and encouragement.

I eventually started to study classical violin, and ended up at Mannes College of Music,(prep division) where I studied with the great Russian violinist Leri Slutsky. After my time at Mannes, I auditioned for New England Conservatory in Boston, where I studied with Masuko Ushioda, the gorgeous Japanese violinist.

My meeting with Seamus Egan in the early 1990s in NYC saw the start of our band Solas. This has been my main musical focus over the last 15 years. We have recorded 11 band albums in that time and continue to tour around the world. We are currently touring our new album "Shamrock City."

In 2006, I recorded a duet album with friend and Solas colleague, Mick McAuley. The album is called "Serenade." This album saw the start of a duet with Mick that eventually turned into a trio, with guitarist Colm O'Caoimh. The three of us recorded "Sailing Back to You" in 2012 and the trio of "McAuley Horan and O'Caoimh" was formed.

I have recorded two solo albums: "Just One Wish" on the Shanachie label in 2002 and "The Pleasures of Home" on the Cracker Barrel label in 2004.

I have played, toured, and recorded with Cherish the Ladies (where I started as a dancer) from 1991–1994, The Sharon Shannon Band from 1994–1998 with Donogh Hennesy and Trevor Hutchinson. Some musicians I have played and recorded with over the years include: Solas, Pierce Turner, Liz Carroll, Sharon Shannon, Seamus Egan, Cherish the Ladies, Mick McAuley, Antje Duvekot, John Doyle, Karan Casey, Declan O'Rouke, Damien Dempsey, Mundy, Rosey, Richard Shindell, Luka Bloom, The Duhks, Patty Larkin, Cathie Ryan, Dirk Powell, Natalie Haas, and most recently, the legendary Christy Moore.