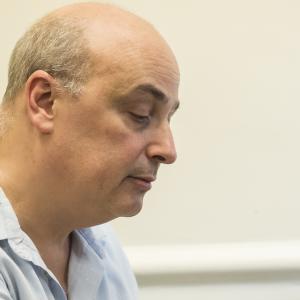 Eyran Katsenelenbogen is a pianist who has performed throughout the world. In 2019, he released his latest solo album, titled Outstandards, with a concert tour that included venues in the U.S., Europe and Israel.

Katsenelenbogen's recordings have been reviewed by jazz publications such as Jazziz, JazzTimes, Jazz Journal International and All About Jazz, which stated in its review of Eyran’s previous release: "88 Fingers is truly a virtuoso's work. Perhaps Katsenelenbogen is most in league with [Art] Tatum for this fact: he sets the bar towards which other pianists must strive."

​In 2014, Katsenelenbogen has toured the east coast of China with pianist Tal Zilber ’18 DMA. During their Piano Fight concert tour, Katsenelenbogen and Zilber performed at the Dalian International Conference Center, the Hai Tian Grand Theatre Hotel, the Weifang Culture and Art Center, the Taiyuan Poly Great Theatre, the Henan Art Center in Zhongzhou, the Wuhan Qin Tai Grand Theatre, the Xuzhou Concert Hall and the Hong Tai Center in Xiamen. In 2015, Katsenelenbogen returned to China alone for a tour titled Jazz and Classical Highlights China Solo Tour dedicated to his mother, Pnina Katsenelenbogen. During that tour he performed fifteen concerts in various venues, including the Cathay Pacific Arts Center Concert Hall, the Wuhu Grand Theatre and the Guangzhou Opera House.

Since 1996, Katsenelenbogen has held a faculty position at the New England Conservatory of Music (NEC) Preparatory School and School of Continuing Education in Boston. At NEC, he has pioneered innovative techniques for teaching improvisation to students with special abilities and diverse needs. As the first piano teacher of jazz prodigy Matt Savage, Katsenelenbogen helped kick off Savage's recording career at the age of seven with their CD One is Not Fun, but 20 is Plenty.

Katsenelenbogen was born in Israel and was first taught by Aida Barenboim, mother and teacher of pianist/conductor Daniel Barenboim. He went on to complete his music education at the New England Conservatory of Music in Boston, where he trained with Ran Blake, Paul Bley, Fred Hersch, Danilo Pérez, George Russell and Gunther Schuller.

Eyran has been committed throughout his life to improvisational piano music. "He is a passionate man who feels deeply, and he has the talent to express those feelings through his playing... You can not help but be moved by his performance." – Frank Rubolino, Cadence.