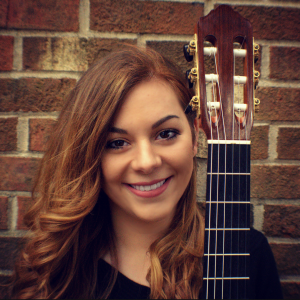 Céili Connors is a Boston based performer and teacher who is actively performing both as a soloist and chamber musician. She is dedicated to helping her students excel through both conventional and inventive teaching methods, while integrating theory and mindful practice techniques. In 2019 she completed her Masters degree in classical guitar performance at the New England Conservatory of music in Boston under the instruction of Eliot Fisk and Jerome Mouffe. She completed her undergraduate studies at the University of Rhode Island with a Bachelor of Music in classical guitar performance. She also spent some time studying and living in Granada, Spain, where she attended the University of Granada and studied flamenco and spanish guitar. Born in Rhode Island, Céili has established a growing studio in Massachusetts while maintaining a faculty position at the Community College of Rhode Island. Céili has appeared on stages all across New England such as Jordan Hall, as well as internationally in numerous cities including London, Granada, Salzburg, and has been involved in a number of festivals across New England including Boston Guitarfest at NEC. Beginning her studies at the age of 8, Céili's primary instructors have been Joseph Smith, John Dennewitz, Adam Levin, Jerome Mouffee and Eliot Fisk. She has also performed for masters such as Leo Brouwer, Jose Caballero, Rene Izquierdo, Bruce Holzman, Grisha Goryachev, Enrique Salmeron, Adam Holzman, Jesus Serrano, David Leisner, the Borromeo String Quartet and many others.