"The Tyranny of Kindness": New Dance/Butoh Peformance by Zack Fuller

This performance of Zack Fuller's “The Tyranny of Kindness” will feature sound by NEC students Kebra-Seyoun Charles and Grace Ward. The performance will last approximately 45 minutes. Fuller will also offer an afternoon workshop on Improvisation Into Performance.

Zack Fuller has been a performing artist in one form or another for most of his life. In the mid-eighties he was the lead singer for the Washington DC post-punk psychedelic metal band Scythian, sharing stages with groups such as Bad Brains, Black Market Baby, and Pussy Galore. In the late eighties and nineties he engaged in theatrical research with Ryszard Cieslak of Grotowskiʼs Polish Laboratory theatre, and worked with dancer/choreographers such as Eiko and Koma and Poppo Shiraishi. In 1997 he was cast in Min Tanaka and Susan Sontagʼs Poe Project: Stormy Membrane, and went on to perform and train with Tanaka over the next few years throughout Japan, Europe and the U.S.

His dance has been described by the Boston Globe as “Cryptic… but characterized by astonishing theatricality,” and “Like an angel coming down Jacobʼs ladder to play in the garbage” by the Japanese dance critic Hidenaga Otori.

Butoh is a Japanese word for dance that refers to a broad spectrum of movement practices that share in the legacy of postmodern dance experimentation that began in Tokyo in 1959, when dancer/choreographers such as Hijikata Tatsumi began applying the tactics of surrealism, neo-dada, and anti-art to the body itself. Generally more figurative, visceral, slower, and less conceptual then most U.S. and European contemporary dance, it embraces the grotesque through a body informed by complex imagery that is kept in darkness; never revealed directly to the audience. Ellen Godena curates a Butoh festival in Boston every year. 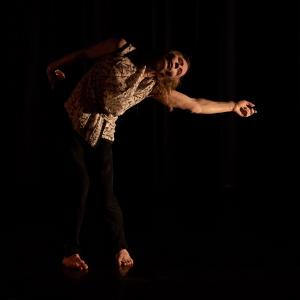 Improvisation Into Performance focuses on the development of an omni-centered body. In it we explore elements of Grotowski work, Min Tanakaʼs Body Weather training, partnering exercises, physical...