The Sphinx Organization is the social justice organization dedicated to transforming lives through the power of diversity in the arts. Sphinx’s four program areas – Education & Access, Artist Development, Performing Artists, and Arts Leadership – form a pipeline that develops and supports diversity and inclusion in classical music at every level: music education, artists performing on stage, the repertoire and programing being performed, the communities represented in audiences, and the artistic and administrative leadership within the field.

In celebration of this organization and its mission, NEC and Sphinx present this cello quartet concert featuring four former and current NEC students—alumni Christine Lamprea, Tony Rymer, and Tahirah Whittington, and graduate student Gabriel Martins—who were each also first-prize winners in past years of the prestigious annual Sphinx Competition. They came together virtually from New York, Berlin, Chicago, and Boston to perform and create this concert premiere for you to stream and enjoy.

Laurence Lesser shares more on how the program came together:

I was lucky to have been a student of the great Gregor Piatigorsky, who many years before had collaborated with Igor Stravinsky in making a transcription of parts of the ballet “Pulcinella” into a suite for cello and piano, called “Suite italienne.”

In 1973, the Chamber Music Society of Lincoln Center was the site of a gala honoring Piatigorsky’s 70th birthday. For this gala, in which seven of his then current and former students (myself included) participated, he took some of the Suite’s movements and made a new transcription for four cellos.

Cut to today – in an “aha” moment, I knew that this transcription would be an ideal vehicle to celebrate our Sphinx first prize alumni. And to honor the contribution of Black American composers, we have paired it with the beautiful slow movement of George Walker’s first string quartet, in a new arrangement for four cellos by NEC DMA degree candidate Eunghee Cho.

And so, please enjoy this joint effort of the Sphinx Organization and NEC.

Before or after the concert premiere, we also invite you to watch the conversation below with featured cellists Christine Lamprea, Gabriel Martins, Tony Rymer, and Tahirah Whittington, led by Ana Abrantes, Director of Education at The Sphinx Organization, and Claudia Robaina Winston, Dean of Artistic Administration at NEC. The conversation focuses on the artists' chosen career paths, challenges and rewards faced as musicians of color, and the role NEC and Sphinx have played in their careers.

More about the Sphinx Organization

Sphinx was founded in 1997 by  Aaron P. Dworkin  with the goal of addressing the underrepresentation of people of color in classical music. The name Sphinx, inspired by the mythical creature and legendary statue, reflects the power, wisdom and persistence that characterize Sphinx’s participants, as well as the enigmatic and interpretive nature of music and art.

Hailed a “firebrand”  (Incident Light.com)  and noted for her “supreme panache”  (The Boston Musical Intelligencer), Colombian-American cellist  Christine Lamprea was the First Prize winner of the 2013 Sphinx Competition. She joined the roster of the Sphinx Soloists Program, and as such is presented as soloist with major orchestras worldwide.

A passionate teacher, Ms. Lamprea worked with Ecuadorian youth in the cities of Quito and Guayaquil, as part of a residency between The Juilliard School and “Sinfonia Por La Vida,” a social inclusion program modeled after Venezuela’s El Sistema program. She continued to pursue musical outreach as a Gluck Community Service Fellow at Juilliard, performing in hospitals and nursing homes in and around New York City as part of a mixed ensemble of dancers, actors, and musicians.

Ms. Lamprea is the recipient of a Paul and Daisy Soros Fellowship for New Americans. She studied with Bonnie Hampton at The Juilliard School and holds a Master’s degree from the New England Conservatory, where she studied with Natasha Brofsky. Previous teachers include Ken Freudigman and Ken Ishii. Ms. Lamprea plays a cello made in 2001 by Guy Cole.

Cellist Gabriel Martins (b. 1998) is the winner of the  2020 Sphinx Competition and the 2020 Concert Artists Guild / Young Classical Artists Trust Grand Prize. Additionally, he has won major prizes in the 2013 David Popper International Cello Competition, 2014 International Tchaikovsky Competition for Young Musicians, 2018 Orford Music Award, 2018 Prague Spring International Music Competition, and 2020 Schadt String Competition. He has performed as a soloist and chamber musician in venues such as Carnegie Zankel Hall, the  Great Hall of the Moscow Conservatory, Maison Symphonique in Montréal,  Teatro Gran Rex in Buenos Aires, and Walt Disney Concert Hall in Los Angeles. According to esteemed cellist Ralph Kirshbaum, he has "revealed heart, passion, intellect, and a finely-nuanced palette of colors in a compelling manner worthy of a seasoned artist."

Born of American and Brazilian heritage, Martins grew up in Bloomington, Indiana. He began playing the cello when he was five, studying with Susan Moses at the Indiana University String Academy. He later served as a teaching assistant at the Academy's summer program. He has  attended the  Orford  Music  Academy, Piatigorsky International Cello Festival, Ravinia  Steans Music Institute, Yellow Barn Music Festival, Four Seasons Festival Winter Workshop,  and Aspen Music Festival and School, where he won the Low Strings Concerto Competition. He went on to pursue his undergraduate studies as a Presidential Scholar at the USC Thornton School of Music (Class of 2019) with Ralph Kirshbaum. In his freshman year at USC, he won the school's concerto competition as well as its  Bach competition. Presently, he is a graduate student with Laurence Lesser at New England Conservatory. Since 2020, Martins plays on a composite Francesco Ruggieri cello made in Cremona, c. 1690 and a François Nicolas  Voirin bow made in Paris, c. 1880.

A native of Boston, Tony began playing cello at age five, attended the Walnut Hill Arts School, was a Project STEP scholarship student from 1996-2007, and was awarded the prestigious Kravitz scholarship in 2007. One of the first recipients of the Jack Kent Cooke Award on the NPR national radio show From the Top, he has also been heard as soloist on WGBH Boston, WCLV Cleveland, and NPR's Performance Today. An avid chamber musician, Tony has collaborated in concert with artists such as Itzhak Perlman, Midori, Ani Kavafian, Miriam Fried, Kim Kashkashian, Paul Katz, Martin Helmchen, and Dénes Várjon.

He completed his Bachelor of Music and Master of Music degrees at New England Conservatory where he studied with Paul Katz and Laurence Lesser while holding the Laurence Lesser Presidential Scholarship. Tony then received a Master of Music degree, with highest marks, as a student of Frans Helmerson at the Hanns Eisler Hochschule für Musik. Tony plays on a cello made by Jean-Baptiste Vuillaume on loan from the Deutsche Stiftung Musikleben.

Grammy-nominated cellist, Tahirah Whittington, is a founding member of D-Composed and the Ritz Chamber Players. She is currently the cellist for the Broadway show Dear Evan Hansen National Tour. Previously, Ms. Whittington was the cellist for Hamilton: An American Musical in Chicago. Studio recordings include The Lion King (2019), Beyoncé’s The Lion King: The Gift, and albums by John Legend and PJ Morton. Television and film appearances include the movie, “Beautiful Day in the Neighborhood” and episodes of “Empire”. Tahirah remotely recorded the cello solo for Rhiannon Giddens’ “Cry No More” arranged by composer, Michael Abels. She received her Bachelor’s Degree from New England Conservatory and her Master’s Degree in Cello Performance from The Juilliard School. Tahirah has studied with Laurence Lesser, Joel Krosnick, and Hans Jørgen Jensen. 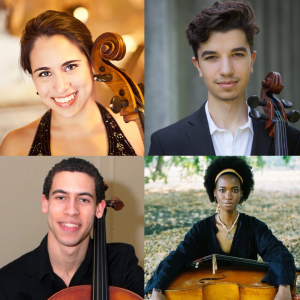