Ludovic Morlot’s élan, elegance and intensity on stage have endeared him to audiences and orchestras worldwide, from the Berlin Philharmonic to the Boston Symphony. During his eight years as Music Director of the Seattle Symphony he pushed the boundaries of traditional concert programming, winning several Grammys.

He is now Conductor Emeritus in Seattle, and in 2019 he was appointed Associate Artist of the BBC Philharmonic Orchestra with whom he has had a close relationship over many years; he returns to both orchestras every season. He was Artistic Director and a founding member of the National Youth Orchestra of China 2017–2021, conducting their inaugural concerts at Carnegie Hall and in China in 2017, and touring with them to Europe in 2019. From 2012–2014 he was Chief Conductor of La Monnaie, conducting new productions in Brussels and at the Aix Easter Festival—including La Clemenza di Tito, Jenufa and Pelléas et Mélisande.

Morlot has conducted the Berliner Philharmonic, Royal Concertgebouw, Czech Philharmonic, Dresden Staaksapelle, London Philharmonic and Budapest Festival orchestras, and many of the leading North American orchestras, notably the New York Philharmonic, Los Angeles Philharmonic, and Chicago and Boston Symphony Orchestras. Morlot has a particularly strong connection with Boston, having been the Seiji Ozawa Fellowship Conductor at Tanglewood and the subsequently appointed assistant conductor for the Boston Symphony. Since then he has conducted the orchestra in subscription concerts in Boston, at Tanglewood, and on a tour to the west coast of America. He has also appeared extensively in Asia and Australasia, notably with the Seoul Philharmonic, Yomiuri Nippon Symphony and Melbourne Symphony Orchestras. Festival appearances have included the BBC Proms, Wien Modern, Edinburgh, and Aspen festivals.

His tenure in Seattle formed a hugely significant period in the musical journey of the orchestra. His innovative programming encompassed not only his choice of repertoire, but theatrical productions and performances outside the traditional concert hall space. There were numerous collaborations with musicians from different genres, commissions and world premieres. Some of these projects, including John Luther Adams’ Become Ocean, Aaron Jay Kernis’ Violin Concerto performed by James Ehnes and an exploration of Dutilleux’s music, have earned the orchestra five Grammy Awards, as well as the distinction of being named Gramophone’s 2018 Orchestra of the Year. Morlot has released 19 recordings with the Seattle Symphony Media label which was launched in 2014.

Morlot opens the 21/22 season with a concertante performance of Wagner’s Die Walküre at Seattle Opera and returns to the Philadelphia Orchestra in February 2022. This season he also conducts the Barcelona Symphony at L’Auditori, Netherlands Philharmonic at the Concertgebouw, Orchestre National de Lille, Bergen Philhar-monic, City of Birmingham Symphony, Orquesta Castilla y Leon, Taipei Symphony, and Queensland Symphony. He has a strong commitment to supporting emerging talent and regularly conducts students at the Colburn Conservatory. This season he sits on the jury of the Leeds International Piano Competition and conducts students at the Royal Academy (London), New England Conservatory (Boston) and on his annual visit to the Aspen Festival. In Summer 2021 he conducted a string of world premieres by young composers in the New Jersey Symphony’s annual CONE Institute concert.

Trained as a violinist, he studied conducting at the Pierre Monteux School (USA) with Charles Bruck and Michael Jinbo. He continued his education in London at the Royal Academy and then at the Royal College as recipient of the Norman del Mar Conducting Fellowship. Ludovic is Affiliate Professor at the University of Washing-ton School of Music in Seattle and a Visiting Artist at the Colburn School in Los Angeles. He was elected a Fellow of the Royal Academy of Music in 2014 in recognition of his significant contribution to music. 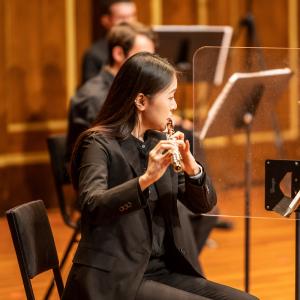