The NEC Jazz Orchestra presents a concert of the work of Mary Lou Williams.

Described by Duke Ellington as “soul on soul,” Mary Lou Williams was a supremely influential jazz pianist, arranger and composer for over 60 years. From Mess-A-Stomp, recorded in 1929 by Andy Kirk and his Clouds of Joy, to Shafi, composed in 1979, the concert will encompass an unusually broad range of jazz styles. Other work presented will include compositions Mary Lou WIlliams wrote for Dizzy Gillespie, Benny Goodman and Duke Ellington, including In the Land of Oo-Bla-Dee, Roll Em’, Scorpio, Walkin’ and Swingin’, and What’s Your Story, Morning Glory?

Guest artist on this concert is NEC alum and pianist Carmen Staaf '05, 2009 winner of the Mary Lou WIlliams Piano Competition.

All compositions are by Mary Lou Williams, unless otherwise noted.

This performance is open to in-person audiences only. A streamed version will be viewable on December 22 at 7:30 p.m. See event listing

Mary Lou Williams was not only the First Lady of jazz; she has a place at the very top echelon of the jazz pantheon. Ms. Williams wrote over 350 compositions throughout her rich and highly eclectic musical career. She also helped spawn an entire generation of young musicians during the 1940s that would precipitate the birth of one of the world’s most influential musical styles, known as bebop. Her students included musicians as influential and varied as Miles Davis, Dizzy Gillespie, Thelonious Monk, Charlie Parker, and countless others.
Among her few peers in the more than 50 years that she was active were Duke Ellington, Benny Carter, Count Basie, and Sonny Blount (aka Sun Ra), all of whom successfully remained contemporary through vast stylistic shifts in the history of jazz, from before swing until well after bebop. Indeed Ellington captured her well when stating that,“Mary Lou Williams is perpetually contemporary.”
Williams came to prominence in the late ‘20s and ‘30s as the principal composer-arranger and pianist for Andy Kirk and His Twelve Clouds of Joy, enhancing her reputation by contributing to the big band books of Benny Goodman, Earl Hines, Tommy Dorsey and, later, Duke Ellington and Dizzy Gillespie. She became an early champion of bebop, adapting its modern harmonies and rhythms to her blues and boogie rooted piano style. In the ‘50s she had a spiritual crisis that led her to abandon music for about three years; she became a Roman Catholic. Her religious conversion had more than personal results.  She began to compose in a sacred vein. This yielded a small masterpiece in 1964 with her hymn in honor of St. Martin de Porres called “Black Christ of the Andes.” She also composed three complete masses including Music for Peace later known as Mary Lou’s Mass.
In 1964, Mary founded Mary Records to release her own self-produced album Black Christ of the Andes. This was not the first record company owned and controlled by an African American musical artist. There had been Dizzy Gillespie with Dee Gee and, importantly, Charles Mingus with Debut. Mary Lou Williams also released Music for Peace (later Mary Lou's Mass) and Zoning, as well as four 45 rpm recordings on Mary Records. Activity on the label, however, ceased by 1975. Williams also founded her own publishing company, Cecilia Music Co., for the same purposes and she is one of the very few African American, and particularly African American women, artists of her time, to have done so.
In 2005, Mary Records was revived by Mary Lou’s former manager and close friend, Rev. Peter O’Brien, to continue the project begun more that forty years ago. Also established around this time was The Mary Lou Williams Collective, an arm of The Mary Lou Williams Foundation, Inc., which was devoted to the recording and performance of the music of Mary Lou Williams. Led by late pianist and composer, Geri Allen, the collective was involved in presenting fresh approaches to her own works which she herself recorded in her lifetime.  It was also intent on recording those of her compositions which had never before been heard on disc.  In 2006, the collective recorded Zodiac Suite Revisited, and in 2010 The Complete Sacred Works of Mary Lou Williams was recorded in honor of the centenary of her birth.
Mary Lou Williams returned to the Jazz world fully in 1970 and remained there for the rest of her life. She appeared in concert and at workshops in colleges, at jazz festivals, in clubs, on recordings, on radio and television. In her last four years she maintained a full professional schedule of appearances while functioning as Artist in Residence at Duke University in Durham, North Carolina. To this day, she remains one of the most historically significant and influential women in jazz.
In the final year of her life, she formed The Mary Lou Williams Foundation.

Pianist/composer Carmen Staaf is a rising force in the NYC and global music scenes. She has performed and recorded with some of the most influential and important musicians of our era. Currently, she is the pianist and Musical Director for NEA Jazz Master Dee Dee Bridgewater. Her past major performances have included the Playboy Jazz Festival in a two-piano setting with the legendary Herbie Hancock and Wayne Shorter, Jazz at Lincoln Center with Wynton Marsalis and the Lincoln Center Jazz Orchestra, and the Kennedy Center alongside Kenny Barron and Fred Hersch. She has been heard at the Village Vanguard, Blue Note, SFJazz and major jazz festivals around the world including the Newport, Monterey, Montreux, and North Sea Jazz Festivals, among many others.
Carmen graduated with a double degree from Tufts University (Anthropology) and New England Conservatory (Jazz Performance), and immediately thereafter became one of the youngest faculty members ever hired by Berklee College of Music, joining their piano department in 2005. After spending some years touring and recording while based in New York (including winning the Mary Lou Williams Jazz Pianist competition), she was accepted to the prestigious Thelonious Monk Institute of Jazz Performance, where she was mentored by the most important living jazz musicians.
Staaf co-leads the group Science Fair with drummer Allison Miller; the band's eponymous debut album features Ambrose Akinmusire, Dayna Stephens, and Matt Penman. She also performs regularly with Allison Miller's Boom Tic Boom, violinist Jenny Scheinman, and Allison Miller’s Parlour Game (with Tony Scherr), drummer Jeff Williams, and vocalist/composer Thana Alexa, in addition to her musical direction for Dee Dee Bridgewater.
Carmen’s most recent album as a leader is Science Fair (Sunnyside), which was released in 2018 to wide critical and audience acclaim (New York Times “Best Jazz of 2018”, Los Angeles Times “Best of 2018”, 4.5 stars in DownBeat). She is a member of the Jeff Williams Trio alongside bassist Michael Formanek; the trio’s album Bloom (Whirlwind) was released in April 2019. Parlour Game released its debut album, Parlour Game, in August 2019. The Carmen Staaf Trio, featuring Michael Formanek and Jeff Williams, released Woodland on Newvelle Records in June 2020.
An active educator, Carmen has held faculty positions at Berklee College of Music, the New School, Stanford Jazz Institute, Swarnabhoomi Academy of Music (Chennai, India), Jacob’s Pillow, Litchfield Jazz Camp, and the New York Jazz Academy, and has led masterclasses around the globe. She was also tapped, with Herbie's approval, to provide transcriptions for Herbie Hancock's masterclass performances and lessons. 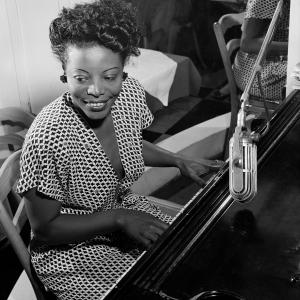