Grow Your Art: How to Write a Press Release

Join Ann Braithwaite, the owner of Braithwaite & Katz Communications, and Bob Blumenthal, journalist, as they teach NEC students how to write a press release for their projects in real time.

Ann Braithwaite is the owner of Braithwaite & Katz Communications, a full-service public relations firm specializing in promoting the foremost jazz artists and events of our time.

Bob Blumenthal was a contributor to The Boston Globe (1990-2002), and has appeared in such publications as The Atlantic Monthly, Rolling Stone, The Village Voice, Down Beat, JazzTimes and Jazziz.  Between 2002 and 2009, he served as Creative Consultant for Marsalis Music, the record label founded by saxophonist Branford Marsalis.

Blumenthal was one of six commissioners for the Recording Industry Association of America who selected the White House Record Library during the Carter Administration; has written hundreds of album notes, including all notes in Blue Note Records’ RVG reissue series; and won two Grammy awards for best album notes for collections by John Coltrane and Miles Davis.

Blumenthal was critic-in-residence at Burlington, Vermont’s Discover Jazz Festival for 16 years, served in a similar role at the 2011 Tanglewood Jazz Festival, and designed a five-part video jazz history for the Montreal Jazz Festival.

In addition to contributing essays to Jazz: Photographs of the Masters (Jacques Lowe), Jazz: The First Hundred Years (John Edward Hasse, editor), The Oxford Companion to Jazz (Bill Kirchner, editor) and the text Discover Jazz, Blumenthal’s first book, Jazz: An Introduction to the History and Legends Behind America’s Music (HarperCollins/Smithsonian) was published in 2007 and hailed as “the single best compact introduction to jazz currently available” by the Wall Street Journal.  His second book, Saxophone Colossus: A Portrait of Sonny Rollins (Abrams), in collaboration with photographer John Abbott, was published in 2010.

Blumenthal received a Lifetime Achievement Award from the Jazz Journalists Association in 2005. 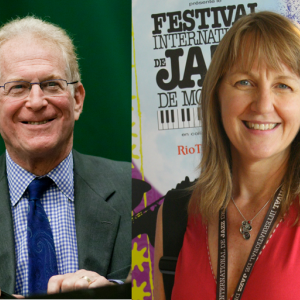