The Pratt Early Music Residency and Performance Series for Early Music is pleased to announce that renowned conductor and early music specialist Nicholas McGegan will join the NEC community for a conversation with Provost Benjamin Sosland. Mr. McGegan's longest association was as Artistic Director of the Philharmonia Baroque Orchestra; in addition, he has held leadership positions with the St. Paul Chamber Orchestra, Milwaukee Symphony Orchestra, Irish Chamber Orchestra, and the Adelaide Symphony Orchestra, and has appeared as guest conductor with numerous internationally-renowned orchestras and festivals. His conversation with Provost Sosland will touch on a variety of topics related to the performance of music on both period and standard instruments, among others.

The Pratt Early Music Residency and Performance Series for Early Music established by Harold I. and Frances G. Pratt  at NEC in 2019, seeks to invite and engage the NEC community with performers and scholars in the Historically Informed Performance field.  Masterclasses, symposia, and performances by nationally- and internationally-recognized scholars and performers are funded through this endowment.  In addition, the Residency and Performance Series aims to provide NEC students with the opportunity to study early music and historically-informed performance with experts in the field, as well as to expand the historical instrument collection at NEC.

This event is online only.

In his sixth decade on the podium, Nic McGegan — long hailed as “one of the finest baroque conductors of his generation” (The Independent) and “an expert in 18th-century style” (The New Yorker) — is recognized for his probing and revelatory explorations of music of all periods. Following a 34-year tenure as Music Director of Philharmonia Baroque Orchestra and Chorale, he is now Music Director Laureate. He is also Principal Guest Conductor of Hungary’s Capella Savaria. At home in opera houses, McGegan shone new light on close to twenty Handel operas as the Artistic Director and conductor at Germany‘s Göttingen Handel Festival for 20 years (1991-2001), and the Mozart canon as Principal Guest Conductor at Scottish Opera in the 1990s. He was also Principal Conductor of Sweden’s Drottningholm Court Theatre from 1993-1996.

Best known as a baroque and classical specialist, McGegan’s approach — intelligent, infused with joy and never dogmatic, along with an ability to engage players and audiences alike — has made him a pioneer in broadening the reach of historically informed practice beyond the world of period ensembles to conventional symphonic forces. His guest-conducting appearances with major orchestras — including the New York, Los Angeles, and Hong Kong Philharmonics; the Chicago, Dallas, Milwaukee, Toronto, Sydney, and New Zealand Symphonies; the Philadelphia Orchestra; the Royal Northern Sinfonia and Scottish Chamber Orchestras; and the Amsterdam Concertgebouw — often feature Baroque repertoire alongside Classical, Romantic, 20th-century and even brand-new works. He has led performances of Mendelssohn, Sibelius, Britten, Bach and Handel with the Utah Symphony; Poulenc and Mozart with the City of Birmingham Symphony Orchestra; and the premiere of Stephen Hough’s Missa Mirabilis with the Indianapolis Symphony Orchestra, paired with Haydn, Brahms and Mendelssohn. He collaborates frequently with the Mark Morris Dance Group, including the premiere productions of Rameau’s Platée and Handel’s Acis and Galatea.

McGegan’s prolific discography includes more than 100 releases spanning five decades. Having recorded over 50 albums of Handel, McGegan has explored the depths of the composer’s output with a dozen oratorios and close to twenty of his operas. Since the 1980s, more than twenty of his recordings have been with Hungary’s Capella Savaria on the Hungaroton label, including groundbreaking opera and oratorio recordings of repertoire by Handel, Monteverdi, Scarlatti, Telemann and Vivaldi. Recently, the collaboration has produced albums of Kraus, Mendelssohn, Schubert, a 2-CD set of the complete Mozart violin concerti, and Haydn’s Symphonies 79, 80, and 81. McGegan has also released two recent albums with the Swedish Chamber Orchestra under the BIS label: Josef Mysliveček’s Complete Music for Keyboard with soloist Clare Hammond and an album of early horn concertos with soloist Alec Frank-Gemmill. His extensive discography with Philharmonia  Baroque includes two GRAMMY nominees, Handel’s Susana and Haydn’s Symphonies 104, 88, and 101.

Mr. McGegan is committed to the next generation of musicians, frequently conducting and coaching students in residencies and engagements at Yale University, the Juilliard School, Harvard University, the Colburn School, Aspen Music Festival and School, Sarasota Music Festival, and the Music Academy of the West. He has been awarded the honorary degree of Doctor of Music by the San Francisco Conservatory of Music; an honorary professorship at Georg-August University, Göttingen; and in 2016 was the Christoph Wolff Distinguished Visiting Scholar at Harvard. McGegan’s fun and informative lectures have delighted audiences at Juilliard, Yale Center for British Arts, American Handel Society, and San Francisco Conservatory.

English-born, Nic McGegan was educated at Cambridge and Oxford. He was made an Officer of the Most Excellent Order of the British Empire (OBE) “for services to music overseas.” Other awards include the Halle Handel Prize; the Order of Merit of the State of Lower Saxony (Germany); the Medal of Honour of the City of Göttingen, and a declaration of Nicholas McGegan Day, by the Mayor of San Francisco in recognition of his work with Philharmonia. 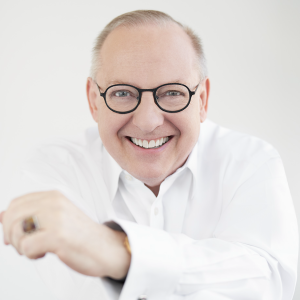 This event does not require a ticket. Unreserved seating is available on a first-come, first-served basis. Doors open 30 minutes prior to the event's start time.