Considered "simply the best there is" by The Boston Globe, the Borromeo String Quartet is one of the most sought-after string quartets in the world, each season performing more than one hundred concerts of classical and contemporary literature across three continents. Audiences and critics alike have championed the Borromeo Quartet's revealing explorations of the complete quartet cycles of Beethoven, Brahms, and Bartók, and its affinity for making challenging repertoire approachable.
Access the concert program in our digital archive.

Nicholas Kitchen, Violin
Kristopher Tong, Violin
Melissa Reardon, Viola
Yeesun Kim, Cello
Ensemble-in-Residence at the New England Conservatory of Music
Ensemble-in-Residence at the Heifetz International Music Institute
Ensemble-in-Residence at the Taos School of Music summer program
Winner of the 2007 Avery Fisher Career Grant
Winner of Lincoln Center's Martin E. Segal Award (2001)
Winner of the Cleveland Quartet Award (1998)
Ensemble-in-Residence for National Public Radio's Performance Today (1998-99)
Prize-winner at the International String Quartet Competition in Evian, France (1990)
. . . . . . . . . . . . . . . . . . . . . . . . . . . . . . . . . . . . . . . . . . . . . . . . . . . . . . . . . . . . . . . . . . . . . . .
Each visionary performance of the award-winning Borromeo String Quartet strengthens and deepens its reputation as one of the most important ensembles of our time. Admired and sought after for both its fresh interpretations of the classical music canon and its championing of works by 20th and 21st century composers, the ensemble has been hailed for its “edge-of-the- seat performances,” by the Boston Globe, which called it “simply the best.”
Inspiring audiences for more than 25 years, the Borromeo continues to be a pioneer in its use of technology, and has the trailblazing distinction of being the first string quartet to utilize laptop computers on the concert stage. Reading music this way helps push artistic boundaries, allowing the artists to perform solely from 4-part scores and composers’ manuscripts, a revealing and metamorphic experience which these dedicated musicians now teach to students around the world. As the New York Times noted, “The digital tide washing over society is lapping at the shores of classical music. The Borromeo players have embraced it in their daily musical lives like no other major chamber music group.” Moreover, the Quartet often leads discussions enhanced by projections of handwritten manuscripts, investigating with the audience the creative process of the composer. And in 2003 the Borromeo became the first classical ensemble to make its own live concert recordings and videos, distributing them for many years to audiences through its Living Archive, a music learning web portal for which a new version will soon be released.
Passionate educators, the Borromeos encourage audiences of all ages to explore and listen to both traditional and contemporary repertoire in new ways. The ensemble uses multi-media tools such as video projection to share the often surprising creative process behind some works, or to show graphically the elaborate architecture behind others. This produces delightfully refreshing viewpoints and has been a springboard for its acclaimed young people’s programs. One such program is MATHEMUSICA which delves into the numerical relationships that under-pin the sounds of music and show how musical syntax mirrors natural forms. CLASSIC VIDEO uses one movement of a quartet as the platform from which to teach computer drawing, video editing, animation, musical form and production processes to create a meaningful joining of music and visual art.
The BSQ has been ensemble-in-residence at the New England Conservatory and Taos School of Music, both for 25 years, and has, for over two decades, enjoyed a long-term relationship with the Isabella Stewart Gardner Museum where it continues to regularly appear. It is quartet-in-residence at the Heifetz International Music Institute, where first violinist Nicholas Kitchen is Artistic Director. The quartet was also in residence at, and has worked extensively as performers and educators with the Library of Congress (highlighting both its manuscripts and instrument collections) and the Chamber Music Society of Lincoln Center. The ensemble joined the Emerson Quartet as the Hittman Ensembles in Residence at the Peabody Institute in Baltimore, and was recently was in residence at Kansas University, the San Francisco Conservatory, and Colorado State University, where it regularly appears.
The BSQ’s presentation of the cycle of Bartók String Quartets as well as its lecture “BARTÓK: PATHS NOT TAKEN,” both of which give audiences a once-in-a-lifetime chance to hear a set of rediscovered alternate movements Béla Bartók drafted for his six Quartets, has received accolades. Describing a Bartók concert at the Curtis Institute, the Philadelphia Inquirer wrote that the quartet “performed at a high standard that brought you so deeply into the music's inner workings that you wondered if your brain could take it all in ... The music's mystery, violence, and sorrow become absolutely inescapable.”
Also noteworthy in the BSQ repertory are its dramatic discoveries within the manuscripts of the Beethoven Quartets, and its performances of the COMPLETE CYCLE; the BEETHOVEN DECATHLON (four concerts of Beethoven’s last ten quartets, all with pre-concert lectures exploring his manuscripts); and single BEETHOVEN TRYPTICH concerts (one concert including three quartets). Its expansive repertoire also includes the Shostakovich Cycle and those of Mendelssohn, Dvořák, Brahms, Schumann, Schoenberg, Janáček, Lera Auerbach, Tchaikovsky, and Gunther Schuller.
The Quartet has collaborated with some of this generation’s most important composers, including Gunther Schuller, John Cage, György Ligeti, Steve Reich, Aaron Jay Kernis, Osvaldo Golijov, Jennifer Higdon, Steve Mackey, John Harbison, Sebastian Currier, and Leon Kirchner, among many others; and has performed on major concert stages across the globe, including appearances at Carnegie Hall, the Berlin Philharmonie, Wigmore Hall, Suntory Hall (Tokyo), the Concertgebouw, Seoul Arts Center, Shanghai Oriental Arts Center, the Incontri in Terra di Siena Chamber Music Festival in Tuscany, Kammermusik Basel (Switzerland), the Prague Spring Festival, and the Haydn Festival in Eisenstadt.
The group recently premiered new works written for it by Sebastian Currier and Aaron Jay Kernis at recitals at Carnegie Hall, Shriver Concerts, and the Tippet Rise Art Center. The ensemble continues to perform violinist Nicholas Kitchen's transcriptions of Bach’s Goldberg Variations and the Well-Tempered Clavier Bk. I and II.  They recently released an acclaimed premiere recording of Bk. I which hit the billboard charts.
“Nothing less than masterful” (Cleveland.com), the Borromeo Quartet has received numerous awards throughout its illustrious career, including Lincoln Center’s Avery Fisher Career Grant and Martin E. Segal Award, and Chamber Music America’s Cleveland Quartet Award. It was also a recipient of the Young Concert Artists International Auditions and a prize-winner at the International String Quartet Competition in Evian, France.

This is an in-person event with a private stream available to the NEC community here: https://necmusic.edu/live 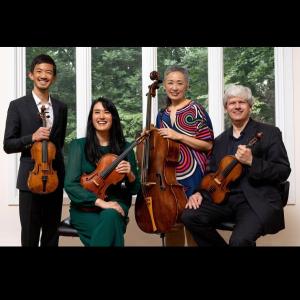