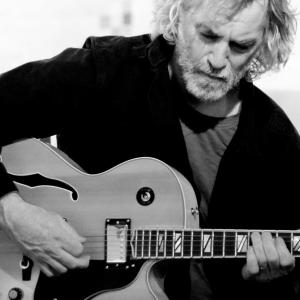 Downbeat Magazine called guitarist Joe Morris, “the preeminent free music guitarist of his generation.”  Will Montgomery, writing in WIRE magazine, called him, “one of the most profound improvisers at work in the U.S.” He was born in New Haven Connecticut in 1955. He began playing guitar at the age of 14 first playing rock music, progressing to blues, then to jazz, free jazz and free improvisation. He released his first record Wraparound (riti) in 1983. He has composed over 200 original pieces of music. In 2000 he began performing and recording on double bass in addition to guitar.

Morris is featured on guitar or bass as a leader, co-leader, or sideman on more than 180 commercially released recordings on the labels ECM, ESPdisk, Clean Feed, Hat Hut, Aum Fidelity, Avant, OkkaDisk, Not Two, Soul Note, Knitting Factory, Leo, No Business, Rogue Art, Relative Pitch, Incus, RareNoise, Fundacja Sluchaj, Corbett and Dempsey, and his own labels Riti and Glacial Erratic. Morris has toured extensively throughout North America and Europe as well as in Brazil, Korea and Japan.

He has lectured and conducted workshops on his own music and on improvisation in Canada, Korea, Portugal, Northern Ireland, and Sweden and at Princeton University, Dartmouth College, Harvard University, Bard College, The University of the Arts, Virginia Commonwealth University, Mannes College of Music, University of Alberta, and University of Guelph. He was the recipient of the 2016 Killam Visiting Scholar Award at University of Calgary. He has taught at Tufts University, Southern Connecticut State University, Longy School of Music of Bard College, and New School. Since 2000 he has been on the faculty in the Jazz and Contemporary Improvisation Departments at New England Conservatory of Music. Morris is the author of the book, Perpetual Frontier: The Properties of Free Music (Riti Publishing 2012).