Systemic racism, unconscious bias, and white supremacy generate countless imbalances of equity, equality, and access. It doesn’t matter whether these imbalances are unintentional; what does matter is that we as an institution take action to identify them, understand their impact, and intentionally dismantle and reset them.

We must examine ourselves, and systematically advance respect, equity, and justice—within NEC first, throughout our field more broadly, and ultimately across society.

Here, we will share details about the systematic and comprehensive process NEC is taking, and will establish frequent and transparent communication about the process, the progress being made, and opportunities for the entire NEC family to get involved.

To get involved, please contact Stanford Thompson, Special Assistant to the President, at belonging@necmusic.edu

This page will be continually updated throughout the summer and coming academic year. We invite you to sign up for periodic email updates about our progress by selecting "NEC's Cultural Equity and Belonging Process."

December 19, 2019
Vice President and Provost Novak provided context for the formation of the Task Force, beginning with the last College Student Affairs meeting on the topic of diversity. The goal of this meeting was to have an open agenda and to start connecting members with one another. Topics discussed included the power dynamic amongst the members, ideas to increase diversity specifically in the Jazz faculty, and the results of the survey distributed by the student group, Initiative for Social Change.

February 21, 2020
President Kalyn opened the meeting by stating the importance of the Task Force’s work to the institution, expressing hope for tangible outcomes. These include an updated DEI statement, a review of curriculum and programming, and providing training options for the NEC community. Ground rules were established, and goals for the group were discussed. Barriers of time, specifically the availability of unpaid time, was identified as a challenge among members. It was recommended that an outside facilitator be engaged. Logistics of individual scheduling, participation, as well as the mechanics for future meetings, were discussed.

March 10, 2020
In addition to a review of the previous meetings, the group discussed the pros and cons of six facilitator options. It was decided that the group narrow to three and interested volunteers form a small subcommittee to interview the finalists. The possibility of engaging a second facilitator to represent diversity was also suggested. Task Force members were asked to share individual thoughts on short-term and long-term goals of the Task Force. Suggestions included changes to the curriculum, and more inclusive repertoire/composers as part of classes and ensembles. Discussion continued about faculty making changes to improve and diversify syllabi and being held accountable to make such changes. Cultural sensitivity training was suggested, including that becoming a requirement for all students, faculty, and staff. There was also a discussion regarding the evaluation process of faculty, staff, and students.

April 8, 2020
The group decided that the minutes of meetings would be kept private to protect the confidentiality and to allow for free and honest conversation. A facilitator description document was reviewed and debated. The subcommittee discussed at the March meeting was formed to move forward with identifying and engaging a facilitator. The Task Force proceeded to discuss the preparedness of NEC students, the responsibility of NEC to its students, and how the global health crisis would require re-thinking of historical practices. The institutional strategic planning process already considers many of these themes. A timeline was laid out for the next steps, specifically regarding the facilitator, a public statement, and identifying meaningful outcomes for the group.

April 30, 2020
The subcommittee met in the interim and presented to the group its recommendation. The group agreed to request a proposal. Logistics and scheduling for a group retreat were discussed as well as how the conclusion of the academic year would affect the timing of a retreat and the future make-up of the Task Force. With some members of the Task Force graduating, it was suggested that all original Task Force members be invited to stay on for the summer but that an application or nomination process could be installed to recruit students, faculty members, and/or alumni. The stated goal would be for the group to represent the student body, and not to limit diversity to race or background. Factors such as musical interests should also be considered for representation.

May 29, 2020
The Task Force agreed on the subcommittee’s recommendation of a facilitator to lead the group. Logistics, scheduling, and timeline for a Task Force retreat were discussed. Five new individuals expressed interest in joining the Task Force. Clarity around the types of faculty and staff that could join was sought. The Collaboration Challenge submissions would be reviewed by the group and discussed at the retreat. There were concerns that ideas presented by the Task Force would not gain traction, as has been the case in the past. Students were asked for their perspective on how to move forward conversations. Suggestions included accountability, enforcement of consequences, a system for prevention, creation of a more diverse slate of faculty, and more comprehensive and wide-spread training on racial and cultural issues. For the next meeting, the group was invited to present goals for a more diverse and equitable institution and to consider the bottlenecks as well as the pathways to accomplish these goals.

July 8, 2020
Stanford Thompson and Emily Master introduced themselves and gave a history of their involvement with NEC and their learnings leading up to this meeting. They have been tasked with addressing the requests of the BSU and helping the institution clear a pathway forward to build a culture of equity and belonging. The definition of “cultural equity,” as defined by Americans for the Arts, was shared. The meeting proceeded with an outline of what Stanford and Emily have learned so far from the different members of the NEC family and recommended steps the Task Force should take this summer and potential action steps in the near future. The group was asked to commit to one more meeting in August. Time was also spent reviewing the past meeting summaries. It was decided that over the next three weeks, two subcommittees would convene. One would finalize a new, expanded DEI statement to be shared with the larger group and recommend for adoption in August. Another would bring forth a new structure with clear mission, goals, representation across the campus, and effective leadership for this group beginning in September 2020.

August 19, 2020
Two members of the Task Force who tendered their resignations due to personal reasons were acknowledged and thanked for their service. Stanford Thompson and Emily Master gave an overview of their conversations and meetings with over 100 individuals and several special interest groups in the NEC community since the previous Task Force meeting. The NEC Perspectives Forum was discussed along with a plan for future offerings, moving to a monthly format after the start of the fall semester. The timeline for announcing a curriculum review was presented. The two subcommittees on a new, expanded DEI statement and a new charter for a revised DEI Task Force reported their findings and suggestions, including the recommendation to adopt a formal process for nominating and electing a representative body of members to serve as the Advisory Council for Cultural Equity and Belonging at NEC. A motion was made, seconded and approved to conclude the tenure of each member of the current DEI Task Force. 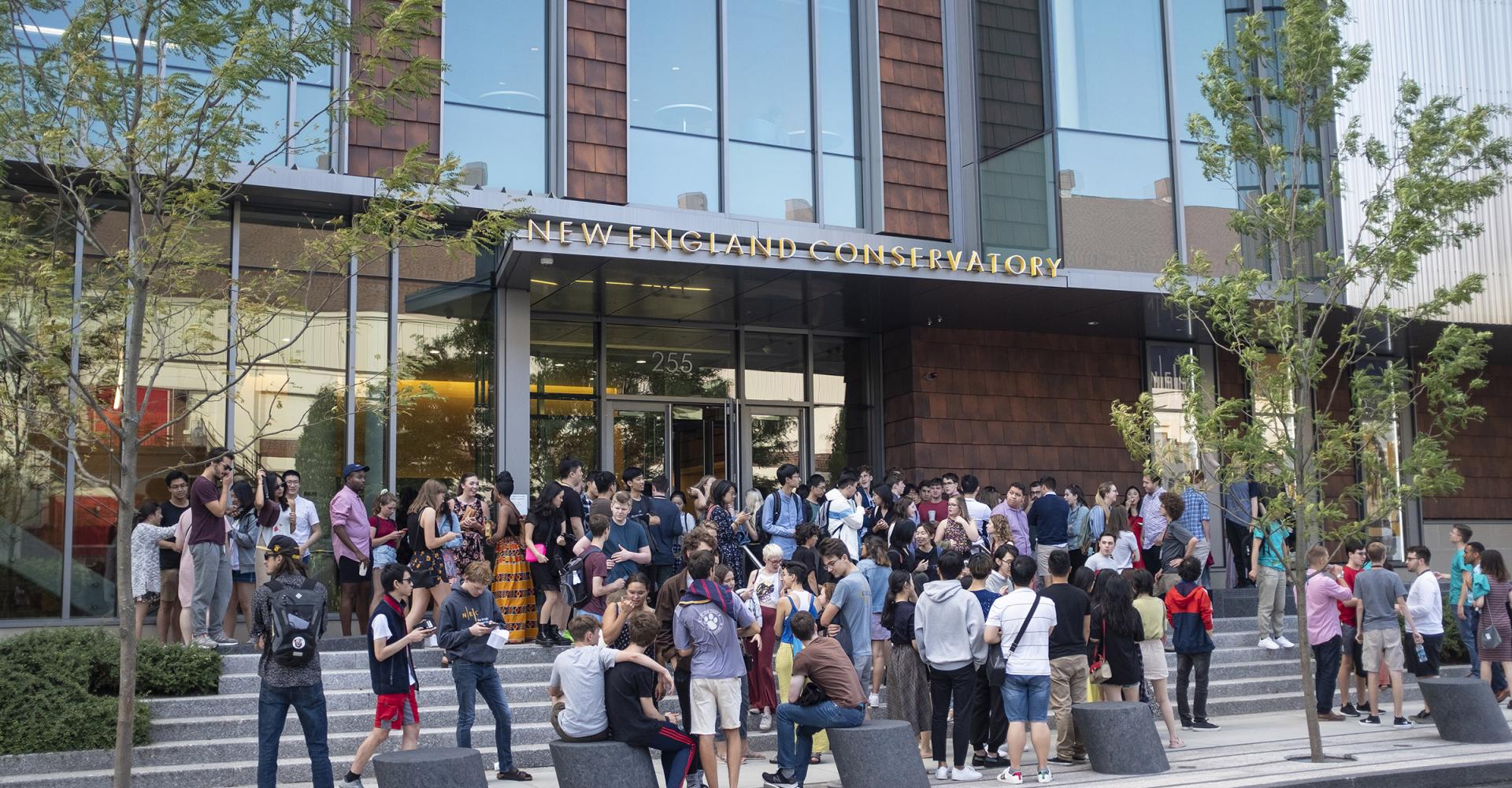 New England Conservatory is committed to providing a safe environment for learning, working, and performing where all members of the community are valued and respected and can reach their personal and artistic potential.

Believing that a vital and diverse community is built on the respect of individuals, NEC fosters an atmosphere of intellectual and artistic freedom, and encourages the open exchange of ideas and creative initiatives. Learning at NEC is an active process that is encouraged and supported by common respect for the talents and potential of each member of the community. An essential part of an NEC education is gaining a deep appreciation of the traditions and cultures from which music originates.

This page will continuously be updated with more information on NEC's Diversity, Equity, and Inclusion initiatives. This statement is currently under review by the DEI Task Force and will be updated in the summer of 2020.