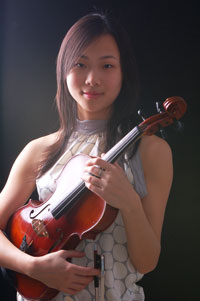 Wenting Kang, a native of Zhuzhou, China and a student of Kim Kashkashian, has won the Tokyo International Viola Competition, held May 26—June 3 at Kioi Hall in Tokyo. Kang, 24, who is scheduled to receive her Master of Music from NEC in December, won 1,000,000 JPY (about $12,700) as well as a custom crafted viola made and donated by Robert Blaszauer, of Budapest, Hungary. In addition, she will be invited to the 2013 Verbier Festival Academy in Verbier, Switzerland.  After being named the first prize winner, she performed in Winner’s Concerts in Tokyo, Osaka and Nagoya.

The second installment of the competition founded by the internationally admired violist Nobuko Imai, the Tokyo is the only Asian music contest to focus solely on the viola. It took place in conjunction with Viola Space 21, Imai’s annual festival which presents concerts and masterclasses in Osaka, Tokyo and Nagoya. In the first installment of the competition in 2008, NEC Artist Diploma recipient, Dimitri Murrath, placed second. Jurors for this year’s event included Imai, Masao Kawasaki, Garth Knox, Thomas Riebl, and Jean Sulem. Contestants were required to play a selection of Bach Suites, Hindemith Sonatas, Brahms Trio, contemporary solo works, a new piece by Toshio Hosokawa, and the Bartok Viola Concerto.

Kang has been featured in numerous performances at the Conservatory this year. Having won the NEC Concerto Competition, she and violinist Grace Park were the soloists in Mozart’s Sinfonia concertante K.364, April 25, with the NEC Chamber Orchestra.  She played in the Mendelssohn Octet with the Borromeo String Quartet and the Trio Cléonice; performed Crumb’s Black Angels on an NEC Contemporary Ensemble concert coached by John Heiss; and was chosen to play on a Chamber Music Gala performance in Penderecki’s String Trio, also coached by Heiss.