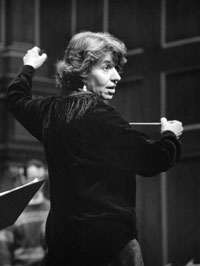 Tamara Brooks, the fiery conductor and Director of Choral Activities at NEC from 1989—2000, died May 19 of a heart attack. She was 70.

A Juilliard-trained pianist and conductor, Brooks was a pioneer, leading choral and orchestral concerts and running a music school (the New School of Music in Philadelphia) at a time when women musicians were only beginning to assume such leadership positions. She conducted ensembles around the world, and was principal guest conductor of the Istanbul Symphony in Turkey, conductor of the Cyprus Broadcast Orchestra and guest conductor of the Mozarteum Orchestra (Salzburg). She was also Music Director and Conductor of two bi-national music festivals on the island of Cyprus (bringing Greek and Turkish musicians together), where she held a Fulbright Professional Grant and designed the music curriculum for Cyprus’ first school of the arts. She was conductor of the Musicians without Borders Bridge to Peace project in Holland and Poland.

Brooks founded and was Music Director of Sequenza (a professional instrumental ensemble devoted to contemporary music in Philadelphia) and Music Director of Mendelssohn Club of Philadelphia for 11 years, one of America’s oldest and most distinguished choruses. With the Mendelssohn Club, she conducted a Philadelphia Academy of Music and Carnegie Hall series and made a Grammy-nominated recording of choral music of Vincent Persichetti. She recorded for Musical Heritage, Arabesque, Centaur, Neuma, Music & Arts, and RCA.

Combining her conducting career with a love of teaching, Brooks served on the faculties of Mount Holyoke College, the State University of New York at Albany, Haverford and Bryn Mawr Colleges, University of Iowa, Hamilton College, as well as NEC. She had also been a guest professor and conductor at Syracuse University, Osaka College of Music and Kyoto City University of Arts in Japan, the Glinka conservatory in Nizhny Novgorod, Russia, and the Sarajevo conservatory in Bosnia and Herzegovina. 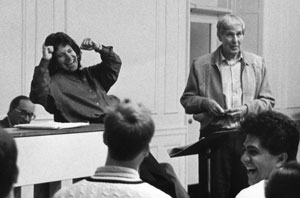 Of her Verdi Requiem, music critic Richard Dyer wrote in The Boston Globe that Brooks’ performance was “the clear winner in this season’s Verdi Requiem contest.” The other “contenders” (who performed within the same three-month period in 1992) were the Boston Philharmonic and the Boston Symphony Orchestra, which featured soloists Deborah Voight, Luis Lima, Agnes Baltsa, and James Courtney. Calling the performance a “sublime, spiritual experience,” Dyer said, “everything was drawn out of the music and the situations it depicts and embodies; nothing was superimposed. And this made every moment of it profoundly original…Everyone sang within what they had and with the purpose of personal expression.  Though there were plenty of soaring climaxes, this wasn’t a blow-out Verdi Requiem; it spoke to humanity’s most intimate fears, hopes, and confidences, and it compelled the active participation of the audience’s feelings, too. More than once I wept.”

“Tamara was incredibly dynamic, charismatic, energetic, a vortex of passion, love, and talent,” said Hankus Netsky, Chair of NEC's Contemporary Improvisation Department, and a frequent collaborator with Brooks. “When she got excited about something, there was no stopping her. And she got excited about a lot of things. When that happened, she was 100% there and never imagined that her students or others might not be as excited about a project as she was.” 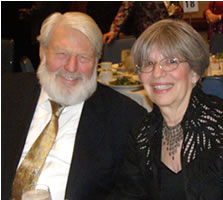 Netsky got to know the conductor well when he invited her to lead the choral music in the 1998 Taste of Passover television program he was working on for PBS—a show produced by NEC Trustee and From the Top founder Gerry Slavet. Brooks threw herself into the show, which was recorded in NEC’s Jordan Hall and involved over 200 NEC students. The show was so successful that the organizers collaborated on a sequel, Taste of Chanukah, a year later. It was while working on these two shows, that Brooks met Theodore Bikel, the great Broadway and film actor, folk singer and musician. Netsky remembers that the two “really hit if off” during the filming of the second show and “after that they were nearly inseparable.” They were married in 2008.

Following upon the two Taste of … shows, Brooks entered a new chapter in her performing life, that of folk musician. “She was not only a fiery conductor but an excellent pianist who could play the whole orchestral repertory on the piano as well as the whole piano repertory,” Netsky said. Folk music was “another unconquered frontier.” After some coaching from Netsky, she became Bikel’s accompanist, having learned to move past playing from score and into a more swinging, improvisatory idiom. “After that, there was no stopping them,” Netsky said. The new partnership was also liberating for Bikel, who “had previously just had his guitar. With Tamara as his accompanist, he could broaden his repertoire.” The couple toured around the world, often giving performances dedicated to world peace and reconciliation. These included the 2005 Bridge to Peace tour of Holland and Poland with an orchestra composed of Christian and Muslim survivors of the war in Bosnia.  More recently they led Bridge to Peace residencies at Syracuse University, Georgetown University, Vassar College, Miami’s Jewish Film Festival, and New York City’s Museum of Jewish Heritage. 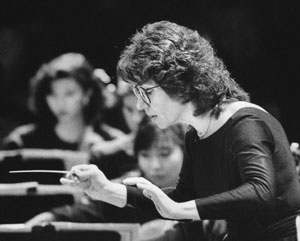 Whether as teacher or performer, Brooks saw music as the medium to unite human beings, and the fundamental musical experience was that of song. “In its purest form, singing is the ultimate communication of music from person to person,” she once said in interview. “What music is inside us helps define us as human beings.” And so the study of music had to be about more than perfecting one’s technique. “Studies are about standards, about the history of one’s own craft and literature, about the importance of art in the world and what it says about prophecy and the human condition, about speaking the truth…We are transmitting views and ideas and warnings and prophecies that are about the essence of life.”

Private services for Brooks will be held in New York on May 24.

Photos 1 and 4 by Jeff Thiebauth; Photo with Tippett by Denise Griliches