How best to prepare musicians for the professional world? Rachel Roberts appointed to lead Entrepreneurial Musicianship. 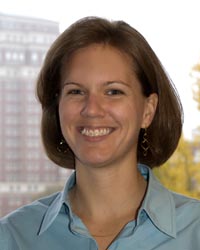 Rachel Roberts  (A. Siddique photo)NEC President Tony Woodcock has announced the appointment of Rachel L. Roberts as the first Director of Entrepreneurial Musicianship at the Conservatory.  She will oversee the creation of NEC's new entrepreneurship program that will integrate professional and personal skills development into the musical training of students. Her appointment takes effect September 21.

A flutist and 2003 graduate of the Eastman School of Music, Roberts is herself an exemplar of musical entrepreneurship.  At Eastman's Institute for Music Leadership, she completed the Catherine Filene Shouse Arts Leadership Program while earning her flute performance degree.  She is also an alumna of the League of American Orchestras' Fellowship training program in Orchestra Management.  Since graduating from that program, she has served as a mentor and orientation advisor to subsequent Fellows.

Roberts comes to NEC from the Atlanta Symphony Orchestra where she held the executive-level position of Director of Strategic Planning Engagement. One of her signature accomplishments at the ASO was to direct the conception, planning, and execution of the three-day grand opening festivities at the Verizon Wireless Amphitheatre at Encore Park. She subsequently managed the inaugural 2008 Classical Summer series at that venue, including the ASO's "traditions", multi-media presentations, and community engagement events.

Roberts' mandate at NEC will be to supplement the outstanding musical training of elite musicians with "the skills, knowledge, and awareness needed to create their own opportunities for musical success," she said.  "Being a top performing artist today is not enough to succeed in the musical world" and young artists need to be armed with an arsenal of professional tools. "I've loved finding leadership opportunities for myself and others that I work with, and my passion is helping others fulfill their own leadership potential."

A native of Fort Madison, Iowa, Roberts began studying piano at age five and took up the flute a few years later.  While a performance major at Eastman, she says her enormous curiosity about the various aspects of the music industry drove her to seek out new opportunities.  "At Eastman, I developed a broadened awareness of the other sides of concert production as well as what it takes to be a successful professional musician.  I learned the importance of strong communication, how to market oneself, how to set up a 501C3 non-profit corporation, and how to negotiate the complexities of the recording industry and labor relations."  She further sharpened her skills through the League of American Orchestras' program and a position prior to which she worked as Artistic and Production Assistant at the Houston Symphony.

Affirming her goal of empowering NEC's young musicians so that they can create gratifying lives in music, Roberts emphasizes that Entrepreneurial Musicianship at NEC will not be a discreet curricular program.  Rather, it will be part of a holistic approach to music education that integrates development of essential skills—such as creative and critical thinking, flexibility, intellectual accomplishment, self-reliance, and communication proficiency—with the musical training that musicians need to be successful today and in the future. Entrepreneurship will permeate everything that takes place at NEC, including studio instruction, classroom courses, performance ensembles and community engagement activities.

Calling Roberts a "major star," President Woodcock said, "We at NEC are looking to create a program of national and international stature that will give our terrific young musicians the tools they need.  Rachel Roberts is exactly the director we need to make this a reality.  We're excited that she will be joining us."