Xiang Yu is Soloist in Prokofiev Violin Concerto No. 1 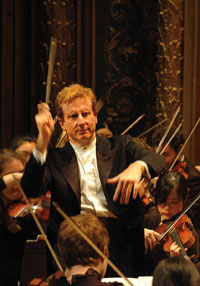 New England Conservatory’s year-long festival Music: Truth to Power continues April 23, when the NEC Philharmonia and Hugh Wolff, the Stanford and Norma Jean Calderwood Director of Orchestras, return to Boston’s Symphony Hall for the first time since 2010.  Wolff has chosen two works with special revolutionary resonance: the Beethoven “Egmont” Overture and Shostakovich’s infrequently heard Symphony No. 11 (“The Year 1905”), which commemorated the Russian Revolutions of 1905 and 1917. Also on the program is a work with special significance for Symphony Hall, the Violin Concerto No. 1 composed by Sergei Prokofiev in 1917 and given its American premiere in 1925 by the Boston Symphony Orchestra, Concertmaster Richard Burgin, and Music Director Serge Koussevitzky. Violinist Xiang Yu, a candidate for the NEC Artist Diploma, is the soloist.

Presented in association with the Celebrity Series of Boston, the performance takes place at 8 pm and is being offered as a Special Bonus to Celebrity Series subscribers. The public is also invited to attend. Tickets are $20/$15; $10 for students, seniors. WGBH members 2-for-1. 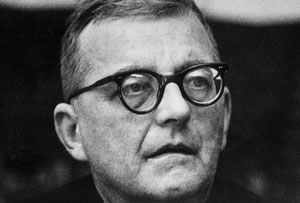 Composed 40 years after the 1917 October Revolution and a half century after the anticipatory 1905 Revolution, Shostakovich’s Symphony No. 11 received its first performance in Moscow in 1957. It came in the wake of Stalin’s death in 1953 but at a time when the composer, who might be expected to feel a sense of liberation from the artistic repression of the Stalinist regime, was feeling depressed and deflated. As Gerard McBurney of the Chicago Symphony Orchestra has written, Shostakovich, with a few notable exceptions like the Tenth Symphony, spent much time cranking out “tub-thumping film music, music for unpretentious practical use, and ‘official’ music of one kind or another, including popular songs to sentimental words of the ‘Communist Youth’ variety.” Not surprisingly, his reputation among serious musicians was in decline, and he was viewed “as an unadventurous conservative, a hack, an official Soviet bard. In the West, his music was written off by commentators as more or less irrelevant as the avant-garde discovered brave new worlds of sound and post-war popular music began to overwhelm the classical traditions.”

When the Eleventh debuted, it was met with widely mixed reactions. There was disappointment among those who heard socialist realist banality, dawning understanding from more subtle listeners, and high praise from musical officialdom—so much high praise, in fact, that Shostakovich was awarded the Lenin Prize for 1958 and was completely rehabilitated from his previous disfavor.  Among the issues cited by all sides was the symphony’s extensive quotation of familiar revolutionary songs and reminiscences of classic Russian scores such as Musssorgsky’s Boris Godunov. Shostakovich himself reportedly said that his work orchestrating Mussorgsky “contributed greatly to my Seventh and Eighth Symphony and then was recalled in the Eleventh and there was a time when I considered the Eleventh my most Mussorgskian composition.” 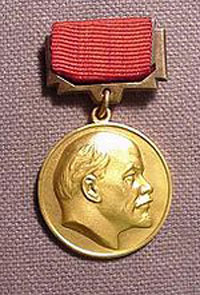 In praise of the song quotations, a Union of Soviet Composers critic commented that “Thanks to extensive use of the revolutionary song heritage, the language of the symphony proved to be simpler and more accessible than in previous works of the composer while remaining at the same time deeply individual.”

On the other hand Aleksandr Solzhenitsyn writing in The Gulag Archipelago “failed to discern any redeeming contemporary message behind the Eleventh Symphony,” according to Shostakovich biographer Laurel Fay.

Yet the great poet Anna Akhmatova, who heard the premiere, was deeply moved by the symphony and the Russian songs it contained. She likened those songs to “white birds flying against a terrible black sky.” And she told a friend, “His revolutionary songs sometimes spring up close by, sometimes float by far away in the sky . . . they flare up like lightning . . . That’s the way it was in 1905. I remember.” 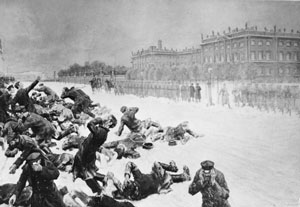 Then, there is the question of whether the symphony has a subtext like certain other Shostakovich works. Richard Taruskin and Solomon Volkov opine that ‘the violent music in the second movement is associated not with events of Bloody Sunday 1905 (in photo right) but with the more contemporaneous events in Hungary (1956) where Soviet troops had put down a rebellion.”   And as the musicologist Lev Lebedinsky put it, "What we heard in this music was not the police firing on the crowd in front of the Winter Palace in 1905, but the Soviet tanks roaring through the streets of Budapest. This was so clear ‘to those who had ears to listen,’ that [Shostakovich's] son, with whom he wasn't in the habit of sharing his deepest thoughts, whispered during the dress rehearsal, ‘Papa, what if they hang you for this?’”

Fay, less inclined to be so prescriptive, allows that “the evils of tyranny and oppression with which the symphony deals are a pervasive theme in Shostakovich’s music, one he well knew is timeless and universal.”

So what is the Symphony No. 11?  Shostakovich’s most Russian/ Mussorgskian work?  A piece of cinematic agit-prop?  A commentary on the crushed Hungarian uprising? A deeply reflective “Requiem for a Generation,” as Shostakovich claimed, according to Volkov's controversial memoir?  The work of a washed-up genius who, after 20 years of suppression, has succumbed to the political juggernaut? A beautifully organized work that speaks tragically to the inevitable recurrence of despotism?

Hugh Wolff, who has a special affinity for the Shostakovich Symphonies and who led the Shostakovich Tenth at the last Symphony Hall concert, feels a strong commitment to the Eleventh.  So listeners will have an opportunity to decide for themselves after the Philharmonia performance, April 23.

For more information and to order tickets, click here.

The only conservatory in the United States designated a National Historic Landmark, NEC presents more than 900 free concerts each year. Many of these take place in Jordan Hall (which shares National Historic Landmark status with the school), world-renowned for its superb acoustics and beautifully restored interior. In addition to Jordan Hall, more than a dozen performance spaces of various sizes and configurations are utilized to meet the requirements of the unique range of music performed at NEC, from solo recitals to chamber music to orchestral programs to big band jazz, Contemporary Improvisation, and opera scenes. Every year, NEC’s opera studies department also presents two fully staged opera productions at the Cutler Majestic Theatre or Paramount Center in Boston, and a semi-staged performance in Jordan Hall. This past 2012-2013 season, the operas produced were Gluck’s Orfeo ed Euridice, Britten’s The Turn of the Screw, and Rossini’s La Gazzetta.