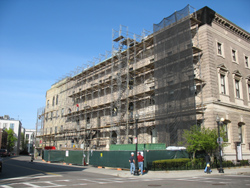 President Tony Woodcock will offer the first glimpse of a refurbished Jordan Hall as construction scaffolding and netting are removed at a ceremonial "unveiling", Wednesday Nov. 18 at noon.  NEC's four buildings have been undergoing $20 million in deferred maintenance work for the last year, and Jordan Hall—a National Historic Landmark—is the last to be completed. Accompanied by festive music and refreshments, the unveiling will celebrate not only removal of the scaffolding but also completion of the project ahead of schedule and under budget.  The festivities will take place at the Conservatory's main entrance at 30 Gainsborough St.

Funded by tax-exempt bond financing completed in July 2008 through MassDevelopment, the construction project was designed to secure, protect, and stabilize NEC's campus buildings for the next 50 years. Tishman Construction, which specializes in new and restorative work, was the project manager.

In Phase 1 completed in fall 2008, the Conservatory replaced roofs on the residence hall/library and made initial repairs to the Jordan Hall façade before suspending work for the winter. In May, the project resumed with scaffolding erected on all four buildings. Over the summer and fall, workers—who numbered more than 100 a day—replaced roofs on the 295 Huntington and Jordan Hall, restored or replaced windows on three buildings, and repointed the facades on all buildings.

Emphasis throughout the project was on sustainability, energy efficiency, historic preservation, comfort, and safety. In the case of Jordan Hall, existing windows were restored wherever possible or replaced by new wood windows that meet preservation guidelines.  New marble was quarried in Italy to replace damaged marble pilasters and decorative medallions.  Decayed terra cotta cornices were removed and replaced with new sections cast from the originals. Similarly, the slate shingles on the roof of 295 Huntington were preserved and reused if in good condition or replaced with new slate.

During the construction, sidewalk access on Gainsborough St. was restricted, drop-off parking prohibited, and the south bound lane of traffic closed to cars.  It is expected that those restrictions will be lifted as soon as all work is completed and equipment removed.