In the Mix – 75 one-hour concerts by exceptional student ensembles 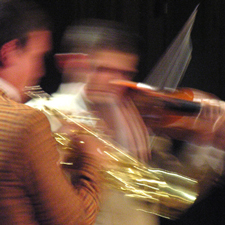 New England Conservatory’s internationally renowned Jazz Studies and Contemporary Improvisation Departments announce over 100 free concerts for the 2013-2014 season.  Highlights include a Sun Ra Centennial Concert; the Music of John Zorn culminating his NEC residency; the Music of Luciana Souza who performs with NEC students at the end of her 4-day residency; the Music of Dave Holland, who leads NEC students in a performance of his music; Jazz and the Struggle for Freedom and Equality featuring some of the landmark compositions created to combat racism and bigotry; Ran Blake’s annual Film Noir Concert, this year featuring music inspired by Otto Preminger’s Laura and other films; In the Mix, 75 one-hour concerts featuring exceptional student ensembles from the Jazz and Contemporary Improvisation departments, and faculty recitals by NEC luminaries including Eden MacAdam-Somer, Frank Carlberg, Tanya Kalmanovitch, David Eure, Vanessa Morris and Robert Labaree. All concerts are free and open to the public. For more information, click here  or call 617-585-1260.

All concerts at 8 p.m. except In the Mix events which take place at 7, 8 and 9 p.m., each with a different ensemble.

Thurs. Sept. 12 Jordan Hall
Eden MacAdam-Somer: Walking Between the Worlds
Eden MacAdam-Somer is one of the most exciting and versatile young musicians performing today. She’s been hailed by the New York Times as reflecting "astonishing virtuosity and raw expression," and her music transcends genre through soaring violin and fiddling, vocals, and percussive dance, weaving in and out of the many cultures that have formed her experience. In this concert, MacAdam-Somer uses her entire body as a sounding board, performing original works and re-compositions for solo performer, with guitarist and banjo player Larry Unger (her duo partner in Notorious), and students and faculty from the New England Conservatory.

Thurs. Oct. 17, Jordan Hall
Music of Vaughn Monroe + Billy Eckstine
NEC Jazz Orchestra directed by Ken Schaphorst
Vaughn Monroe came to the New England Conservatory in 1935 to pursue his dream of becoming an opera singer. Five years later years heformed his own big band in Boston and began recording a series of hits for RCA Victor. Although he only studied at NEC for one semester, Vaughn Monroe’s archives were donated to the school after his death. This will be the first concert featuring that donated music. Another noted vocalist and brass player, Billy Eckstine, led one of the most influential big bands in the history of jazz, featuring such giants as Art Blakey, Miles Davis, Dizzy Gillespie, Dexter Gordon, Fats Navarro, Charlie Parker and Sarah Vaughn. The NEC Jazz Orchestra will perform Eckstine’s hits, including I Want to Talk About You and Jelly, Jelly, as well as the early bebop classics Cool Breeze and Oo Bop Sh’bam.

Wed. Oct. 30, Brown Hall
The Music of Fred Hersch
NEC grad and faculty member Fred Hersch will perform with NEC students in the culmination of his four-day residency.

Tues. Nov. 5, Jordan Hall
Ninth Annual Film Noir Concert — Preminger’s Laura and more
Pianist/composer/improviser Ran Blake and trombonist/ filmmaker Aaron Hartley bring an extra dimension to Hallowe'en with specimens of that most haunting genre, film noir. Now an annual NEC tradition in its ninth year, this year's concert is based on the best-known specimens of the genre: Laura, Whirlpool (Otto Preminger, 1944/1949), and Leave Her to Heaven (Stahl, 1945). Students and faculty from NEC's Contemporary Improvisation department perform along with scenes from the film, creating a real-time original score as they respond to the drama through improvisations, recompositions, and reinterpretations of David Raksin and Alfred Newman's original music. Members of Aaron Hartley’s Storyboard Noir Ensemble play a key role in this concert.

Nov. 11—14,18—21, Pierce Hall
In the Mix
Jazz performance majors play in ensembles coached by NEC faculty. Each evening presents three sets in an ambience similar to that of a great jazz club.

Tues. Nov. 26, Mon., Dec. 2, Pierce Hall
In the Mix
Jazz performance majors play in ensembles coached by NEC faculty. Each evening presents three sets similar in an ambience similar to that of a great jazz club.

All concerts at 8 p.m. except In the Mix events which take place at 7, 8 and 9 p.m., each with a different ensemble.

Tues. Feb. 18, Jordan Hall
A Hard Rain’s Gonna Fall
CI students and faculty use original works and recompositions to explore our identities as artists in relation to the struggles, challenges, and social issues that we come up against every day. Following in the tradition of such greats as Bob Dylan, Pete and Peggy Seeger, Abbey Lincoln, John Coltrane, Dmitri Shostakovitch, Amkoullel, and Arya Aramnejad, we will turn ourselves and our communities inside-out, examining the way that music shapes and is shaped by our place in the world around us.

Thurs. Feb. 27, Jordan Hall
Jazz and the Struggle for Freedom and Equality
Ken Schaphorst leads the NEC Jazz Orchestra in some of the landmark compositions created to combat racism and bigotry. Selections include Charles Mingus’ Haitian Fight Song, Carla Bley’s Dreamkeeper as well as excerpts from Duke Ellington’s Black, Brown and Beige.

Thurs. April 17, Jordan Hall
Sun Ra Centennial Concert
Ken Schaphorst leads the NEC Jazz Orchestra in a celebration of the 100th Anniversary of Sun Ra’s arrival day with many of his classic compositions including A Call for All Demons, Brainville, Planet Earth, Saturn, and Space is the Place.

NEC’s Jazz Studies Department was the first fully accredited jazz studies program at a music conservatory. The brainchild of Gunther Schuller, who moved quickly to incorporate jazz into the curriculum when he became President of the Conservatory in 1967, the Jazz Studies faculty has included six MacArthur "genius" grant recipients (three currently teaching) and four NEA Jazz Masters, and alumni that reads like a who’s who of jazz. Now in its 44th year, the program has spawned numerous Grammy winning composers and performers. As Mike West writes in JazzTimes: “NEC’s jazz studies department is among the most acclaimed and successful in the world; so says the roster of visionary artists that have comprised both its faculty and alumni.”  The program currently has 114 students; 67 undergraduate and 47 graduate students from 12 countries.

Founded in 1972 by musical visionaries Gunther Schuller and Ran Blake, New England Conservatory's Contemporary Improvisation program is “one of the most versatile in all of music education” (JazzEd).  Now in its 41st year, the program trains composer/performer/ improvisers to broaden their musical palettes and develop unique voices.  It is unparalleled in its structured approach to ear training and its emphasis on singing, memorization, harmonic sophistication, aesthetic integrity, and stylistic openness.  Under Blake's guidance for its first twenty-six years, the program expanded its offerings under subsequent chairs Allan Chase and Hankus Netsky. Alumni include Don Byron, John Medeski, Jacqueline Schwab, and Aoife O'Donovan; faculty include Carla Kihlstedt, Blake, Dominique Eade, and Anthony Coleman. “A thriving hub of musical exploration,” (Jeremy Goodwin, Boston Globe), the program currently has 43 undergrad and graduate students from 14 countries.