Cellist Narek Hakhnazaryan and violinists JeHye Lee and Nigel Armstrong are NEC-educated prizewinners at one of the world's top competitions. 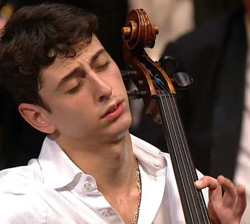 Narek Hakhnazaryan, who completed New England Conservatory's Artist Diploma program last month as a student of Laurence Lesser, has received the Gold Medal in cello at the XIV International Tchaikovsky Competition in Moscow.

Violinists JeHye Lee '08 M.M., '10 G.D. a student of Miriam Fried, and Nigel Armstrong '07 Prep, who studied with Donald Weilerstein, took third and fourth prizes in their instrument. Instead of awarding a first prize in violin, the jury divided second prize among two contestants.

In addition to the €20,000 Gold Medal award, Hakhnazaryan also received the Audience Prize. At the conclusion of the second round of competition last week, he was honored by the jury for "Best chamber concerto performance" as well. He will perform in a Winners' Gala Concert with an orchestra conducted by Valery Gergiev, to be held in Moscow on July 1. More information here.

Violin Third Prize winner JeHye Lee also received a jury award last week for "Best chamber concerto performance," in addition to her €10,000 cash award. Lee was one of only two female contestants in the three instrumental categories (piano, violin, cello) out of 15 musicians who advanced to the final round of the competition. 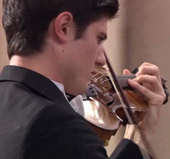 Nigel Armstrong, who receives €5,000 as a Fourth Prize winner, was also honored for "Best performance of the work written specially for the Competition." The work in question, John Corigliano's STOMP, invited soloists to invent a step dance accompaniment and other bravura moves. Writes the composer: "So STOMP demands a theatrical mind, an unerring ear, and a delight in making music with the entire body." Armstrong opted to perform a portion of the work with his instrument behind his back, arousing considerable comment.

These three finalists educated at NEC were part of an extraordinary 10-person NEC "team" invited to perform at this quadrennial competition, perhaps the best known of the international classical music competitions because permanently associated with the 1958 win by American pianist Van Cliburn, at the height of the U.S.-Soviet Cold War.

Each of NEC's three finalists appeared on major Boston stages during their time here.

Nigel Armstrong also had the coveted experience of performing in Symphony Hall, as a Boston Symphony Orchestra youth concerto competition winner. He was heard nationwide as a participant in the From the Top radio program.

The Tchaikovsky Competition's official blogger for violin remarked at one point that JeHye Lee might have a facility for chamber music. In response to that insight, we can confirm that Lee, in addition to her student recitals, performed in Jordan Hall as a member of an NEC Honors Ensemble, the Cadeaux Quartet, and at one of NEC's chamber music gala concerts.

With four years separating occurrences of the Tchaikovsky competition, this one marked a new era of competition media exposure. Live webcasts made it possible for millions of music lovers worldwide to watch all performances and many rehearsals, accompanied by knowledgeable and brisk live commentary. Facebook was a lively and very multilingual forum for sharing opinions and information, and it was here that a scandal erupted around remarks made by one of the competition orchestra conductors during a rehearsal that was broadcast prior to the final competition round. The conductor was replaced, and Narek Hakhnazaryan, at whom his words were directed, became an online folk hero.

The official bloggers of the competition were unsparing in their comments, and not always in alignment with jury outcomes. Among the initial NEC slate, violinist Nancy Zhou and cellist David Eggert continued to receive praise on the official blog long after they had been eliminated from competition.

Recognized nationally and internationally as a leader among music schools, New England Conservatory offers rigorous training in an intimate, nurturing community to 720 undergraduate, graduate, and doctoral music students from around the world. Its faculty of 225 boasts internationally esteemed artist-teachers and scholars. Its alumni go on to fill orchestra chairs, concert hall stages, jazz clubs, recording studios, and arts management positions worldwide. Nearly half of the Boston Symphony Orchestra is composed of NEC trained musicians and faculty.

The oldest independent school of music in the United States, NEC was founded in 1867 by Eben Tourjee. Its curriculum is remarkable for its wide range of styles and traditions.  On the college level, it features training in classical, jazz, Contemporary Improvisation, world and early music. Through its Preparatory School, School of Continuing Education, and Community Collaboration Programs, it provides training and performance opportunities for children, pre-college students, adults, and seniors. Through its outreach projects, it allows young musicians to engage with non-traditional audiences in schools, hospitals, and nursing homes—thereby bringing pleasure to new listeners and enlarging the universe for classical music and jazz.