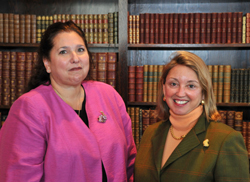 Carole Haber (l), Wendy ShattuckSoprano and longtime NEC voice faculty Carole Haber has been named the first occupant of the Wendy Shattuck Chair in Voice—NEC's first endowed chair in the Voice Department.  Haber, who received her M.M. at NEC after studying with Helen Hodam, has taught at the Conservatory for 21 years as well as pursuing an active performing career.  Wendy Shattuck, who endowed the Chair, is also an NEC voice alumna and a member of the Board of Trustees. She and her husband Samuel Plimpton made the gift as part of NEC's recently completed $100 million Endowment Campaign, The Gift of Music.  Shattuck, who serves in the Conservatory's Mentor-Mentee Program has this year been mentoring a Haber student, Abigail Krawson '11 M.M.

The purpose of the endowed chair is to support in perpetuity the voice faculty position of a "distinguished teacher of voice." 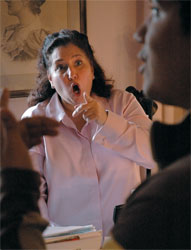 Haber, who combines both a performing career and extensive studio experience, clearly fits that description, said President Tony Woodcock in announcing the appointment.  A lyric coloratura soprano, Haber won the N. Meyer Baker Award and the Eleanor Steber Music Foundation Award at the 1989 Washington International Voice Competition at the Kennedy Center. She has become well known for her interpretations in the Mozartian and Bel Canto styles and made her operatic debut as the Queen of the Night in The Magic Flute. Her performances of this role throughout the East Coast have been acclaimed by The New York Times, High Fidelity, Opera News, and The Boston Globe, among others. Haber has also sung with leading orchestras and choral groups throughout the United States with such conductors as Robert Shaw, Christopher Hogwood, Roger Norrington, Andrew Parrott, Keith Lockhart, and Sarah Caldwell.

In 1996, the soprano premiered Daniel Pinkham’s The White Raven and Robert Kyr’s Passion According to Four Evangelists. She recorded the latter work on the New Albion label. In 1997, Haber made her Carnegie Hall debut with the Orchestra of St. Luke’s in the Brahms Requiem.

"I want to express my deep gratitude to Wendy and Sam for their support of the voice and opera program at NEC," President Woodcock said. "And I'd like to extend my congratulations to Carole as the first occupant of this important faculty Chair."