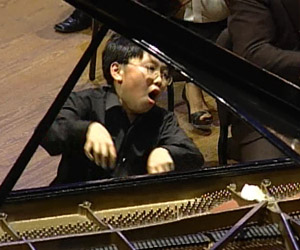 George Li, the NEC Preparatory School piano wunderkind, performed last night for President and Mrs. Obama, German Chancellor Dr. Angela Merkel and her husband Dr. Joachim Sauer at a state dinner in the White House Rose Garden. George, 15, and a student of Wha-Kyung Byun in NEC’s Preparatory School, played the Liszt Hungarian Rhapsody No. 2 on an after-dinner concert that also included a performance by members of the National Symphony Orchestra conducted by Christoph Eschenbach and James Taylor and his band.

George will be traveling with the NEC Youth Philharmonic Orchestra June 14—24 on a tour of eastern Europe during which he will be piano soloist in concerts at the Musikverein in Vienna, Dvorak Hall of the Rudolfinum in Prague, and the Litomysl Smetana Festival in the Czech Republic. He will play the Beethoven Piano Concerto No. 4 under the baton of Benjamin Zander. 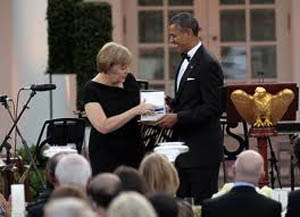 Fifteen year-old pianist George Li won First Prize in the 2010 Young Concert Artists International Auditions. He was also awarded five YCA Prizes: the Sander Buchman Award, the Ruth Laredo Award, the John Browning Prize, and the Paul A. Fish Memorial Award for career development, and the Slomovic Prize for a concerto engagement. He was the recipient of the Saint Vincent College Bronder Prize for Piano, appearances with the Boise Philharmonic, the Chamber Orchestra of the Triangle and the Vancouver Recital Society, and the Festspiele Mecklenburg-Vorpommern Prize and Usedom Music Festival Prize (both in Germany).  Next season, Mr. Li will open the Young Concert Artists Series with his New York debut in the Peter Marino Prize Concert at Merkin Hall, make his Washington debut at the Kennedy Center, sponsored by the Alexander Kasza-Kasser Prize, and appear in Boston at the Isabella Stewart Gardner Museum.

Already in demand as an amazing young performer, George’s recent engagements include Rachmaninoff’s Concerto No. 2 with the Ridgewood Symphony Orchestra (NJ), Chopin’s Concerto No. 1 with the Waltham Symphony Orchestra (MA), and Beethoven’s Concerto No. 4 with Symphony Pro Musica (MA) and also with the Youth Philharmonic Orchestra of the New England Conservatory in Albany, Boston and on tour in Europe.  He has given recitals this season at the First Presbyterian Church in Utica (NY), the Parish Center for the Arts in Westford (MA) and in the “Prodigies and Masters of Tomorrow” Discovery Series in Miami.

George Li gave his first public performance at Boston’s Steinway Hall at the age of nine.  He has appeared as soloist with the Cleveland Orchestra as First Prize winner of the inaugural Thomas and Evon Cooper International Piano Competition, the Xiamen Philharmonic in China, the Símon Bolívar Youth Orchestra in Venezuela, the Boston, Brooklyn, and Spartanburg (SC) Philharmonic Orchestras, the Miami, Princeton, Albany, and Lexington symphonies, the Nordic Chamber Orchestra in Sweden, and with “I Solisti di Perugia” in Italy.

Mr. Li performed at the opening ceremony of Boston’s new Institute of Contemporary Art and the inauguration of President Tony Woodcock at the New England Conservatory.  He has appeared in recital at Boston’s Steinway Hall and was presented in recitals by the Hilton Head International Piano Competition and the Gina Bachauer International Piano Competition.  As a chamber musician, Mr. Li is a member of the New England Conservatory’s Vivace Trio, which has played on “From the Top” on NPR and WNET.  The Trio also performed for members of US Congress at the Senate Office Building in Washington, DC.

If you’d like to hear George play, check out his Live from Fraser performance which he recorded last Friday in WGBH’s Fraser Recording Studio. It will be broadcast Friday, June 9 at 7 p.m. and repeated Sunday June 11 at 11 a.m. on Classical 99.5.

For further information about George Li, check his website.  For more information on NEC’s Preparatory School, visit the website