Wife of Cellist Laurence Lesser, She was “First Lady” of NEC during Lesser’s Presidency 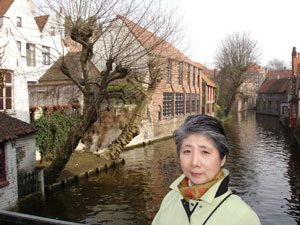 One could describe violinist Masuko Ushioda’s life as an enviable and artful balance of passions.  From her earliest years, there was music, of course, but a deliberate balance between technical mastery of her instrument and deep artistic expression. From a jet-setting soloist who won the silver medal in the 1966 Tchaikovsky Competition, she became more settled, a homebody and gourmet cook, after her marriage to Laurence Lesser and the birth of their children, Erika and Adam. She taught outstanding students, offering both an example of unstinting discipline and personal warmth. And she impressed her performing colleagues, particularly those with whom she played chamber music at NEC, with her seriousness and dedication but also her sense of humor.

Ushioda, 71, died Tuesday after a six month battle with leukemia.  She had joined the NEC faculty in 1974, the same year as her husband, and was the unofficial first lady of NEC during Lesser’s presidency from 1983—96.

Born April 4, 1942 in Shenyang, Manchuria—like another Japanese musician and lifelong friend Seiji Ozawa, Ushioda was the daughter of a cosmopolitan family. Her father was an architect and her mother a folkloric dancer and choregrapher. Western music was a constant in her family and so it was natural that she should study violin.  She was a pupil of Anna Ono, who was a student of the great pedagogue Leopold Auer (teacher of Elman, Heifetz, Milstein, Zimbalist). She attended the Toho Gakuen School and played in the orchestra conducted by Hideo Saito, Ozawa’s conducting teacher and a musical guru revered by a whole generation of instrumentalists.  At age 18, she left home to study in Leningrad and followed that with six years in Switzerland.

“She lived all but the first 18 years of her life outside of her country,” said Lesser, who holds the Walter W. Naumburg Chair in Music. “She remained a Japanese citizen and always felt uncomfortable if she couldn’t go back. So she was connected to, but not limited by her nationality. She was very much a citizen of the world.” 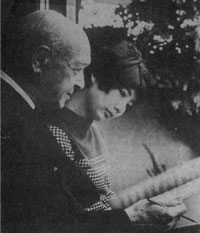 Ushioda’s playing was “incandescent, deeply musical, with a rare beauty of sound,” said Lesser, who performed with his wife on numerous occasions from orchestral soloing in the Brahms Double Concerto for Violin and Cello to the many First Monday at Jordan Hall chamber music concerts that he created and programmed. “She had a great command of the instrument, but she wasn’t a mechanical player as one often thinks of Russian trained musicians,” Lesser said.  “There was a counterbalancing profundity of expression that she developed under the tutelage of Joseph Szigeti (in photo right) in Switzerland.”

Ushioda’s student and colleague, Joanna Kurkowicz, who received an Artist Diploma from NEC, agreed. “She was a wonderful combination of two schools: the Russian/Polish school that I could really relate to and the Szigeti school.”  The latter style Kurkowicz compared to “having an old soul.” When you play, the sound has such expression it breaks your heart.” 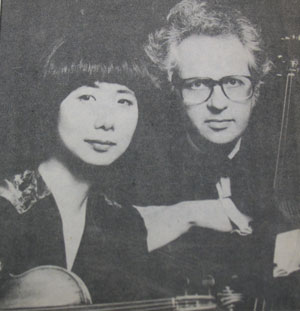 Ushioda and Lesser met when both were competing in the Tchaikovsky Competition and then performing post-competition with other laureates in several Russian cities. But, by chance, life coincidences kept throwing them together throughout that summer of 1966.  First, Lesser spent a holiday in Geneva, Switzerland with some college classmates and went to have lunch with cellist Pierre Fournier, a great friend of his teacher Gregor Piatigorsky.  Fournier insisted that Lesser call on Szigeti, another friend of Piatigorsky. “For some reason, Szigeti wanted me to observe him giving a lesson to a young violinist—Masuko.”  Then, later in the summer, Lesser went to hear some concerts at the Tanglewood Music Festival where the first prize winners of the Tchaikovsky Competition had been invited to play. But because the winners were all Soviets and couldn’t get visas, Tanglewood invited the 2nd prize winners—and Stephen Kates, Misha Dichter, and Masuko performed.” 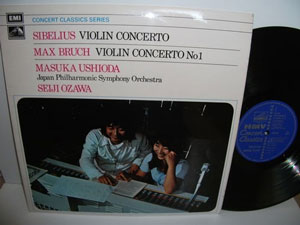 It would be another five years before the couple married, during which Ushioda traveled around the world performing with major orchestras and in recital.”She was a global figure,” Lesser said. And even during the first year of their marriage, “she was away for a total of six months.” But the soloist’s international life was taking its toll.  “She was tired of traveling alone, being a soloist, staying at hotels, where men on occasion would try to pick her up.”   When she got married, “she said she wanted to stop playing and having 12 children.” That, of course, didn’t happen, but she did redirect her focus and “was happy to be at home.”  And when she did travel out on the international circuit it was usually for something like the annual Saito Kinen Orchestra tours in which former Saito students came together to honor their venerated master and renew old musical friendships. She and Lesser, however, greatly enjoyed traveling together and during sabbaticals, for example, visited Egypt and cruised on the Nile.

Among the supreme pleasures of home was food and cooking. Lesser says that they more often discussed what they were going to eat and what recipes they would try than musical matters. “She did Japanese dishes very well but she was international in her tastes and interests,” Lesser said. Kurkowicz added: “They treated cooking as art. Masuko loved trying new dishes, and she was always brave to eat even the most exotic things. Erika, Masuko's daughter, even became Executive Director of Slow Food because of the love for food inculcated in that house.” (Her son Adam is a woodworker and furniture maker and both children live in Brooklyn, NY) And Lucy Chapman, Chair of Strings at NEC, recalled fabulous New Year’s parties in which “Masuko pulled out all the stops. The meal was always beautifully put together.” But there was never any sense of effort or panic.  “Although she might have put hours and hours of work into it, it always felt simple, effortless. And her playing was like that as well.” 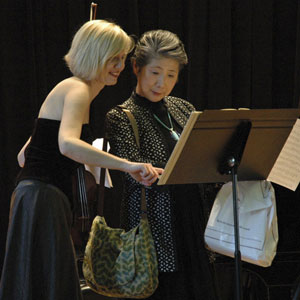 Dinner invitations were one of the side benefits of being an Ushioda student. The principal rewards came in the guidance the teacher offered—both in music and how to live a life.  Both Chapman and Kurkowicz (with Ushioda in photo right) spoke of this balance that Ushioda demonstrated and taught. “There was this internal discipline that she instilled in students,” Chapman said, “but it was not neurotic discipline. You do what you do because you love music. Therefore, this is what you have to do if you are to play well. It was no nonsense.” At the same time, there was also a wonderful sense of humor and personal warmth.  She made students feel very grounded,” said Kurkowicz. “And if you had a problem, she never gave you the answer on a plate but guided you to find your own answer.  I studied with many great teachers. But it was only with Masuko that I discovered what my artistic personality was.”

Until her illness was diagnosed, Ushioda continued to practice and play regularly. Among her last projects was a Stravinsky recording that she had been working on for several years, Lesser said. Recorded but not yet edited, it includes the Duo Concertante and Divertimento as well as Apollo, in an arrangement for chamber ensemble that Ushioda made herself.  “She adored Stravinsky,” her husband said.

Funeral arrangements for Ushioda were private. But Lesser is planning to organize a memorial tribute at NEC in September.  Gifts in her memory may be made to the NEC Annual Fund for scholarship support and/or to Beth Israel Deaconess Medical Center for leukemia research.