Distinguished performer was "trumpet mother" to many students 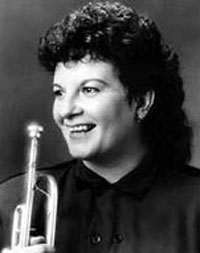 New England Conservatory is mourning the death of faculty member Laurie Frink, a renowned trumpeter and educator.  Frink died at her home in Manhattan on July 13 at age 61.

“Laurie Frink was a beloved teacher, known by many as their 'trumpet mother,'” said Ken Schaphorst, Chair of NEC’s Jazz Studies Department.  “I noticed immediate improvement in the playing of every NEC student who worked with her. She was also one of the most accurate and musical lead trumpet players I've ever heard. Her warm and nurturing spirit, exceptional teaching and stunning performances will be greatly missed by her students, colleagues and friends.”

"Laurie Frink was one of the most accurate and accomplished trumpet players I have ever played with," said longtime friend and colleague John McNeil. "To me, it's pretty amazing that she could be equally great as a brass teacher as well. Those things don't always go together. I would say that Laurie had a profound effect on jazz trumpet and trombone playing in New York and elsewhere. She had a knack of figuring out exactly what a student needed to do to improve. I know this not from observation, but from being one of those students."

With McNeil, her fellow NEC faculty member, Frink coauthored Flexus: Trumpet Calisthenics for the Modern Improviser, which the New York Times called “an essential resource for many trumpeters since its publication a decade ago. The book’s exercises and études came from Ms. Frink’s reservoir of strategies for addressing physical issues on the horn, especially where a player’s embouchure, or formation of lips and facial muscles, was concerned.” She was well known for her insightful ability to solve physical difficulties experienced by many brass players.

Her students have included Dave Douglas, Ambrose Akinmusire, Jon Crowley and many others.

Considered the foremost authority and teacher of the Carmine Caruso method, Frink attracted professional brass players from around the world. Her personable style contributed to her success as a clinician, lecturer, and conductor. In addition to her work ranging from junior high school wind ensembles to professional jazz orchestras, she was also a featured artist at the International Trumpet Competition in Kiev, and the International Trumpet Guild Conference in Goteborg, Sweden, and a member of the ITG Board of Directors.