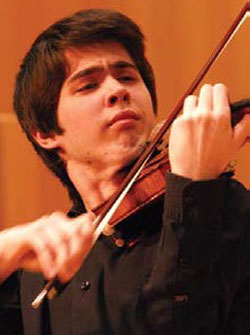 Congratulations to violinist Daniel Aizenshtadt ‘16, a student of Miriam Fried, who recently won the Ilona Kornhauser Prize in Violin at the Aviv Competition in Israel. Daniel, 21, who comes from Modi'in, Israel, triumphed in a competition that is one of the most prestigious in the world.

A project of the America-Israel Cultural Foundation, the competition was created to recognize young performing musicians who are ready for a professional career by awarding prizes in their various instruments. It is open to players, age 21—29 and composers aged 24—32. Organized in a three-year cycle, with each instrument spotlighted every third year (except piano, which is held every two years). In each of the categories, only one prize is given and only if a proper candidate is identified. Winners receive prize money, exposure to the public and to professional critics, and are given performance opportunities and assistance in developing a career. Another NEC musician, Kobi Malkin, won the last Aviv violin competition in 2011.

This year celebrating its 75th anniversary, the America-Israel Cultural Foundation (AICF) has been the touchstone of excellence in Israeli culture since its founding, supporting promising young artists with over 15,000 scholarships and furthering the growth of more than 600 of Israel’s leading arts institutions. Most of Israel’s finest artists in every discipline have received assistance from AICF. Among those supported are: Itzhak Perlman, Menashe Kadishman, Pinchas Zukerman, Gil Shaham, Yefim Bronfman, Eytan Fox, Ohad Naharin, The Cameri Theater, Sam Spiegel Film School, the Israel Philharmonic Orchestra, the Israel Museum and the Batsheva Dance Company. On February 5, Daniel, the other winners of the 2014 Aviv Competitions and past winners joined with the Israel Symphony Orchestra Rishon leZion for a concert in Heichal Ha'tarbut Rishon leZion celebrating AICF's 75th Anniversary.

Daniel, born in Israel in 1992, began studying violin with his mother at age 9, continuing with Irena Etigon and Irena Svetlova, before coming to NEC. He made his solo debut at age 12 with the Israel Camerata Orchestra under Avner Biron, and performed with the Israel Philharmonic at ages 15 and 16. He has performed solos with the Soloists of Tel Aviv Orchestra, the Haifa Orchestra, and the Orchestre Romantique Européen in Paris.

Daniel was a member of the Young Israel Philharmonic, serving as concertmaster, and has participated in performance projects with the Mishkenot Sha’ananim Music Center. He has been supported by the America-Israel Cultural Foundation. A Keshet Eilon alumnus, he has performed as a soloist in its Sounds of Music concert series. He has participated in masterclasses with Zakhar Bron, Shmuel Ashkenasi, Ani Schnarch, Maxim Vengerov and Ivri Gitlis. Daniel has performed in chamber ensembles with his father, cellist Jefim Aizenshtadt. He plays a Nicolo Gagliano violin on loan from Yehuda Zisapel’s collection.