NEC’s Abreu Fellows Class of 2010-11 Creating, Working in Nucleos in US 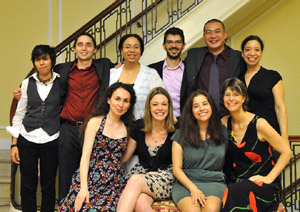 NEC is delighted to announce that six of the Abreu Fellows Class of 2010-11, who graduated from their training program earlier this month, have positions leading or working in El Sistema-inspired music education programs throughout the country.  The four others are currently negotiating positions with a variety of organizations.

The second class enrolled in the Abreu Fellows Program at New England Conservatory, the Fellows recently completed a five-week residency in Venezuela where they observed and worked with children in the renowned music education program founded by Dr. José Antonio Abreu. Upon returning to Boston, they received graduate certificates in an NEC ceremony where they played chamber music together and gave presentations on their experiences in Venezuela.

Founded in 2009, the Abreu Fellows program was created to fulfill the TED “Wish to Change the World” made by Dr. Abreu when he was awarded the prestigious TED Prize.  The goal is to recruit and train 10 post-graduate musicians, “passionate about music and social development,” to become leaders of US music programs modeled after the Venezuelan program. Each class spends a year at NEC in a combination of seminar work and experiential programs in the field. Besides the Venezuelan residency, the Fellows also visited and participated in internships at the OrchKids project in Baltimore and the YOLA youth orchestra program pioneered by the Los Angeles Philharmonic. The third class of Fellows will begin their training at NEC in early September.

Duly prepared “to change the world,” the Fellows will take on the following assignments:

David Gracia is currently in conversation with the Principal of a New York City public school, PS 366 - Washington Heights Academy, where he plans to launch an El Sistema-inspired program in collaboration with a local community services organization.

Laura Jekel is in the advanced planning stages of forming MYCincinnati, an El Sistema-inspired program in Price Hill, Cincinnati. She will be working with various local partners.

Liz Schurgin is building a summer camp for El Sistema participants nationwide based at Rockport Music for 2012.

Patrick Slevin will become the Program Director of El Sistema Austin in collaboration with the Hispanic Alliance for the Performing Arts and the University of Texas at Austin.

Graciela Briceno, Steven Liu, Andrea Profili and Adrienne Taylor are currently in conversation with a variety of organizations throughout the U.S. and their respective post-fellowship positions have yet to be finalized.