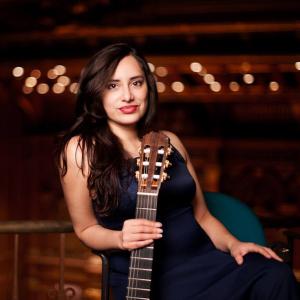 From an early age, Zaira Meneses began studying both classical guitar and voice and appearing frequently in a wide variety of venues both as a guitarist and singer. She traveled widely, as well, performing with the famed Orquesta de Guitarras founded by Maestro Alfonso Moreno. At the age of 17 and as the youngest contestant, she won first prize in an important national concerto competition in the legendary guitar mecca of Paracho. This success led to performances of Joaquin Rodrigo's Concierto de Aranjuez and Concierto Madrigal for two guitars throughout Mexico.

Since moving to the United States in 2001, Meneses has built a reputation for her warm sound, crystalline technique, and superb natural musicality performing in many locations including NEC's Jordan Hall, New York's 92nd Street Y, Alice Tully Hall at Lincoln Center, and Salzburg's Wiener Saal. She has also collaborated with eminent pianists such as Jon Kimura Parker and Virginia Eskin, with whom she has often appeared in lecture-recital format.

Meneses has served as artist-in-residence at universities throughout the U.S. and recently began a long-term association with Syracuse University. She is Director of Community Outreach and Student Affairs for the international festival Boston GuitarFest and Artistic Director of the new cross-disciplinary cultural initiative “Guitar and Friends,” for which she was awarded a special grant by the Albert Augustine Foundation.