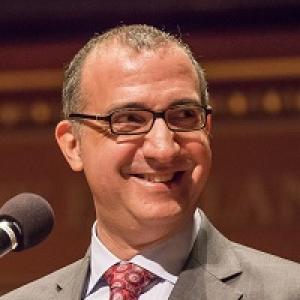 An active chamber and freelance musician in New York for 10 years, bassoonist Thomas Novak was a founding member of the Amerigo Ensemble, which performed at Wichita State University, Iona College, Hofstra University, and on the Evergreen House Concert Series in Baltimore. In addition, the quintet presented educational programs under the auspices of the New York Philharmonic, Chamber Music Society of Lincoln Center, and Chamber Music Northwest, among others. He is a former member of Quintet of the Americas, with whom he made his Carnegie Hall debut in 1992 and presented concerts in Canada, Bermuda, Venezuela, Colombia, and throughout the United States.

A member of the NEC administration since 2001, Thomas Novak was hired as Performance Outreach Manager, but was soon appointed Acting Director of Admissions and then Director of Admissions. In 2003, his role was expanded to Dean of Admissions and Financial Aid and Assistant Provost. Shortly after President Woodcock joined NEC in 2007, Novak was appointed Dean of the College; in 2012, he became Provost and Dean of the College. Novak served as Interim President of NEC from July 2015 to December 2018. He has also continued to coach chamber music at the College level, often guiding NEC honors ensembles such as Quintet Royale.