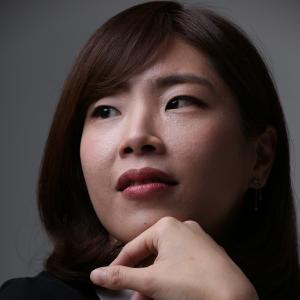 Praised by the Cleveland Plain Dealer as a “Brilliant champion,” and by La Libre Belgique for her “poetic enchantment” and “epic performance,” internationally recognized pianist Sangyoung Kim has gained attention through numerous competitions and performances throughout South Korea, North America, Europe, and Israel. In May 2013, Ms. Kim became a Laureate of the Queen Elisabeth International Music Competition.

Since her orchestra debut at age 9 with the Seoul Philharmonic Orchestra, Ms. Kim has appeared as a soloist with the Yewon Orchestra and won numerous prizes in Korea. After coming to the United States in 2002, Ms. Kim has continued to meet with succession in competitions such as the New England Conservatory Concerto Competition and the Heida Hermannes International Music Competition, San Marino International Piano Competition, and obtained not only the Gold Medal but also the Russian and Chopin etude Prizes from the Usasu Bösendorfer International Piano Competition. Other prizes include the highest honors from the both the Yewon Art School and the Seoul Art High School, and the Carol and Robert T. Henderson Presidential Scholarship from New England Conservatory.

Ms. Kim has appeared as soloist with the NEC Philhamonia Orchestra, Concord Orchestra, Phoenix Symphony Orchestra, Orchestre Royal de Chambre de Wallonie in Belgium, and the National Orchestra of Belgium. Other featured performances include recitals at Chopin Hall, Kumho Gallery and Kumho Art Hall in Korea, Norris Cultural Center in Illinois, Williams Hall and Jordan Hall in Boston, Cleveland Play House Bolten Theater in Ohio, Eckhardt-Gramatte Hall and Roza Centre in Calgary, Canada, the Courchevel Music Festival and Music Academy of Villecrozein France, Tel Aviv Museum of Art in Israel, Théâtre Royal de la Monnaie in Belgium, and the Paderewski Piano Academy in Poland. In 2009, Ms. Kim was invited to the Kennedy Center in Washington. D.C to give a recital as the part of the Millennium Stage Concert series.

As a chamber music lover, Ms. Kim’s chamber performances have been frequently heard in Jordan Hall, Fraser Performance Studio at WGBH Radio, and Harvard University. Ms. Kim participated in an extensive tour of the Boston area, playing Schoenberg’s Pierrot Lunaire with other musicians including flutist Paula Robison as the narrator. She also collaborated with composer Michael Gandolfi in a performance of his Resin in Resonance (2008) which was broadcasted by WGBH. Recently, Ms. Kim’s commercial recordings of David Owens’ Piano Sonata for Two Pianos has been released by Albany Records in July 2014 and of Joseph Summer’s “You May Think of Art” by Parma Recordings Company in February 2015.

After graduating from Seoul Art High School as a student of Kyung Sook Lee and Bon Hee Ku, Ms. Kim has studied at New England Conservatory, where she earned DMA, under the guidance of Wha Kyung Byun and Russell Sherman.