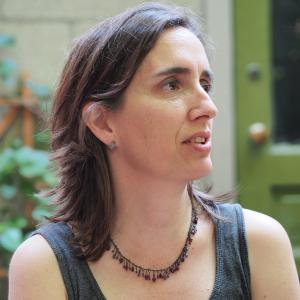 The music of composer Julia Werntz is rooted in a clear, melodic sensibility with a highly nuanced and elastic approach to time and pitch. Her intricate melodic and rhythmic language often communicates the irregular contours of human physicality—bodily motions, speech, and thought patterns—and frequently reacts to sensations from the natural world. Through her music, her scholarship, and her teaching, Werntz has become recognized internationally as a leading voice in the field of microtonal music. Her compositions have been performed at concert series, festivals and venues around Europe and the Northeastern United States, such as the Muziekgebouw in Amsterdam, Unerhörte Music and the BKA Theater in Berlin, Stockholm New Music Festival, the Tage für Neue Musik at the Darmstadt Akademie für Tonkunst, the Week of Contemporary Music, Bucharest, the Here/Now Festival in Sofia, the UK Microfest 3 and UK MicroFest 2019, the Hamburg Klangwerktage, New York’s Vision Festival, Boston’s Enchanted Circle and Extension Works, Pittsburgh’s Music on the Edge, and the series of groups such as Ecce Ensemble, Ludovico Ensemble, Ensemble New Babylon, Ensemble SCALA, Kamraton Ensemble, Loadbang, Firebird Ensemble, Prana Duo, DuoKaya, Patchtax, Peridot Duo, Auros Group for New Music, Firebird Ensemble, and NotaRiotous.

In addition to her manual on microtonal ear training and composition, Steps to the Sea: Ear Training and Composing in a Minute Equal Temperament (Frog Peak Music), Werntz has published articles on microtonal and other contemporary music in Perspectives of New Music, The Sonneck Society Bulletin, ParisTransatlantic, NewMusicBox, and New World Records. She has given guest lectures at institutions such as the Royal Academy of Music in London (part of the UK Microfest 4), the Hochschule fur Musik und Theater Hamburg, Wesleyan, Tufts and Brandeis Universities, among others. She was Artistic Director of the Boston Microtonal Society from the mid-1990s until its closure in 2018, during which time she organized and hosted countless concerts, colloquia, workshops, and salons, with guest composers and performers from several countries, and co-founded and co-directed the BMS chamber ensemble NotaRiotous.