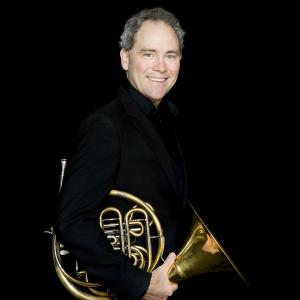 James Sommerville joined the BSO as principal horn in January 1998, and joined the New England Conservatory faculty that fall. At the BSO he occupies the Helen Sagoff Slosberg/Edna S. Kalman chair. He is also Music Director of the Hamilton Philharmonic Orchestra. At NEC, Sommerville made his first appearance conducting the Youth Philharmonic Orchestra in February 2013.

The winner of the highest prizes at the Munich, Toulon, and CBC competitions, Sommerville has pursued a solo career that has spanned 25 years, and has brought critically acclaimed appearances with major orchestras throughout North America and Europe. His disc of the Mozart Horn Concertos with the CBC Vancouver Orchestra won the Juno Award for Best Classical Recording in Canada. Other award-winning CBC recordings include the Britten Serenade for Tenor, Horn, and Strings and Britten's Canticle. Sommerville has recorded chamber music for the Deutsche Grammophon, Telarc, CBC, Summit, and Marquis labels. He is a member of the Boston Symphony Chamber Players, with whom he tours and records regularly.

Sommerville has been a member of the Toronto and Montreal Symphony Orchestras, the Canadian Opera Company Orchestra, Symphony Nova Scotia, and was acting solo horn of the Chamber Orchestra of Europe. He has toured and recorded extensively as an orchestral player. He is heard regularly on the CBC network, and has recorded all the standard solo horn repertoire for broadcast.

As a guest artist and faculty member, Sommerville has performed at many chamber music festivals, throughout Canada, the U.S., Europe, and Japan. Recent solo performances of note include the world premiere of Christos Hatzis' Winter Solstice, in Yellowknife, N.W.T.; the North American premiere of Ligeti's Hamburg Concerto with the BSO; and the John Williams Horn Concerto. In recent seasons, Sommerville has appeared as a soloist in London (with the Academy of St. Martin's in the Fields), and in Costa Rica, Holland, Quebec, Ottawa, and Italy. In 2007, he performed the world premiere of Elliott Carter's Horn Concerto, commissioned for him by the Boston Symphony Orchestra. Sommerville also tours as a member of Osvaldo Golijov's Andalucian Dogs. In April, 2010, he stepped in on 48 hours' notice to perform Mozart's Horn Concerto No. 2 with Bernard Haitink and the BSO.

As a conductor, Sommerville has appeared with many professional orchestras and ensembles, throughout Canada and the USA. He has led the Hamilton Philharmonic to great critical acclaim in his three years there as Music Director. Recent engagements include appearances in Canada with Symphony Nova Scotia, the Toronto Symphony Orchestra, and the Edmonton, London (Ontario), and Québec Symphony Orchestras.