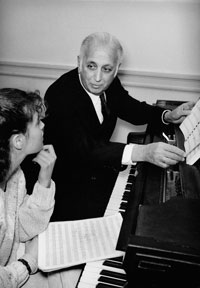 New England Conservatory is mourning the death of Robert DiDomenica, composer, flutist, former Dean, and member of faculty from 1969-1992. DiDomenica died May 20 of pneumonia at the age of 86.  He leaves his wife Ellen Bender, a flutist, teacher, and composer; sons from his first marriage: David, Peter and wife Patsy, and Claude and wife Bessie; and four grandchildren: Maria, Rebecca, Angelina, and Vincent.

A native New Yorker, DiDomenica received a Bachelor’s degree from New York University. His flute teacher was Harold Bennett, member of the Metropolitan Opera Orchestra for 21 years. He studied composition with Wallingford Riegger, but his most profoundly influential teacher was Josef Schmid, a protégé of Alban Berg.  Before coming to Boston, DiDomenica pursued an active freelance performing career, appearing with groups ranging from the New York City Opera, Bach Aria Group, New York Philharmonic, the Modern Jazz Quartet and various Broadway shows. He joined the NEC faculty at the invitation of Gunther Schuller, then Conservatory president and a lifelong friend.  DiDomenica taught theory and composition and served as Associate Dean and Dean between 1973—1978, service he performed with kindness, gentleness, the highest artistic standards, and administrative expertise.

Laurence Lesser, President emeritus and Naumburg Chair in Music, recalls working closely with DiDomenica when they were serving on the "transition committee" in spring 1982 while the Board of Trustees engaged in a search process to fill the vacancy in the Presidency. "We were entrusted with the academic and music decisions and that's when I really got to know him," Lesser said. "One of the main features of his personality was his humanity. He was a warm and caring person. He was not a marshmallow, though. He had strong views but they were based on people." As an educator, he was "passionate about harmony and he was always eager for students to learn more about this subject that he cared so much about."

However consuming his performing and educational careers might be, DiDomenica was always composing. Winner of a Guggenheim grant in 1972, he wrote works that were performed by the Berkshire, New England Composers and Contemporary Arts festivals; by Gunther Schuller; by James Levine and the Munich Philharmonic; the Opera Company of Boston and Sarah Caldwell; the Boston Modern Orchestra Project; conductor Paul Dunkel, a former student; and by his first wife, the late Leona DiDomenica, a distinguished pianist.

Although his method was that of 12-tone serialism, DiDomenica’s style always evinced “an Italianate lyricism,” said John Heiss, longtime NEC composer who knew DiDomenica from the time he joined the faculty. “When Bob taught composition students, he always stressed that they could find elegance and beauty without relying on triadic harmonies.”

Heiss, who performed many of his fellow composer’s works, spoke warmly of their originality and innovation. “Bob wrote a piece based on the big development section of the last movement of Mozart’s Symphony No. 40, which uses a 12-tone sequence. In his work, he quotes from the Mozart and it is the most shocking, convincing, beautiful and original moment I’ve ever heard.”

Besides symphonic works and concertos, DiDomenica composed for piano, voice, chamber ensembles (some with electronic tape), and flute. But his primary focus in his later years was opera. In 1972, he finished his first operatic work, a setting of Jean Genet’s play The Balcony. Although that work wasn’t staged until 1990, when Sarah Caldwell and the Opera Company of Boston performed it in Boston and at the Bolshoi Theatre, excerpts were performed at NEC beginning in 1975. The recording embedded on this page features a cast of outstanding Conservatory students including several who went on to major careers like Keith Kibler, Janice Meyerson and Beverly Morgan.

When The Balcony was premiered in Boston, James Oestreich of The New York Times wrote: Mr. DiDomenica's Balcony is a wonderfully intelligent construct, overlaid with a lyrical and dramatic sensibility that makes searing emotional contact at many crucial points.  Richard Dyer writing in The Boston Globe said: “In The Balcony, Robert DiDomenica has composed an opera that is at once original, allusive and strange… It begins as ritual, moves to romance, and ends in improvisation that is both parody and naked truth… In the hands of Sarah Caldwell and a gifted cast of singing actors it makes for a compelling evening of musical theater.”

Besides The Balcony, DiDomenica wrote a trilogy based on Shelley’s play, The Cenci, a setting of Hawthorne’s The Scarlet Letter, and a setting of Becket’s Waiting for Godot that remains unfinished. In every case, he fashioned his own libretti, always paying reverential attention to the authors’ original texts.

DiDomenica's works are archived in The Library of Congress and Harvard University.

“His mind was always active,” said his wife. “He was always thinking about the current piece or planning for the next.  He loved words, literature and ideas, history and philosophy, science and discoveries of the cosmos.”  He fashioned a libretto based on Hawthorne’s short story Rappaccini’s Daughter and presented it as a surprise to Bender on her birthday for what was to become her opera, Rappaccini’s Daughter.  “He was always writing me poems,” Bender said, “and I set many of them to music as song cycles.”