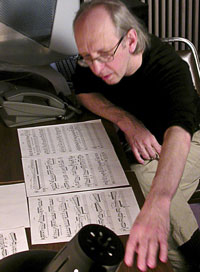 A composer with such a distinctive voice that his music was instantly recognizable. A teacher who encouraged his astonishingly varied students to hone their own artistic profiles and wanted no imitative acolytes. A “private bon vivant,” who shared homemade Polish comfort food with friends at his annual New Year’s Day party. A wonderfully supportive musical colleague. A lover of fine wines, birds, the paintings of Caravaggio, and Captain Beefheart.

This is how NEC friends, colleagues, students, and his former composition teachers remembered Lee Hyla, who died June 6 in Chicago, IL. An alumnus of NEC from the Class of 1975 and former student of Malcolm Peyton and John Heiss, Hyla served on the faculty from 1992—2007 and was chair or co-chair of the composition department for most of that time.  Hyla, who was 61, died from complications of pneumonia. At the time of his death, he served on the faculty at Northwestern University where he was the Harry and Ruth Wyatt Professor of Theory and Composition, and coordinator of the composition and music technology program.

Born in Niagara Falls, NY and brought up in Greencastle, Indiana, Hyla , after his undergraduate studies at NEC, received his Master of Arts from SUNY Stony Brook in 1978, then lived in New York City before returning to NEC in 1992.  During his time in Boston, he became deeply embedded in the musical life of the city as well as the Conservatory. He wrote numerous works for Boston area performers, including the Lydian String Quartet for which he composed his four String Quartets; Triple Helix Piano Trio; pianists Stephen Drury and Judith Gordon; flutist Fenwick Smith; cellist Rhonda Rider; the Gramercy Trio; Dinosaur Annex; Musica Viva;  Boston Modern Orchestra Project; the St. Botolph Club and Firebird Ensemble; Tanglewood Music Center; and New England Conservatory. 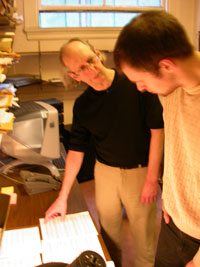 Hyla’s work was also in demand among such high profile groups as the Kronos Quartet (with Allen Ginsberg), Orpheus Chamber Orchestra, Speculum Musicae, and St. Paul Chamber Orchestra. He received commissions from such prestigious foundations as the Koussevitzky, Fromm, Barlow, and Naumburg, and from the Concert Artist’s Guild, Meet the Composer/Reader’s Digest Consortium Commissions, Chamber Music America, the Philadelphia Music Project and the National Endowment for the Arts, ISCM and League of Composers, and Mary Flagler Carey Charitable Trust.

Although he was not a composer who “played the game” of securing prizes, he did in fact receive the Stoeger Prize from the Chamber Music Society of Lincoln Center, a Guggenheim Fellowship, two National Endowment for the Arts fellowships, the Goddard Lieberson Award from the American Academy of Arts and Letters, and the Rome Prize. His music was recorded on the Nonesuch, New World, Avant, CRI, and Tzadik labels.

Critics, former teachers, faculty colleagues, former students, or performers of Hyla’s works were unanimous in their conclusion that the composer’s music was absolutely distinctive. 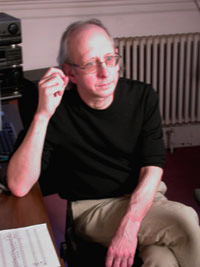 Writing about the Concerto for Piano and Chamber Orchestra No. 2, New York Times critic Anthony Tommasini stated, “Lee Hyla writes works that deftly blend expressionistic, complex contemporary atonal idioms with elements of avant-garde jazz, rock, and even punk.  But this description, though true as far as it goes, does not begin to convey the ingenious skill and sheer originality of Mr. Hyla’s music…he excels at what every composer strives to do: to take the sounds that capture him and fashion them into a distinctive voice.”

Calling him a “creative giant and a rare American maverick,” current composition chair, Michael Gandolfi said, “Lee’s voice was unique: one part rock and roll, one part heady, complex music; one part cognizant of 19th century Romanticism; all of which was cast in structures of uncompromising vigor - powerful, yet tinted with the most delicate beauty.  The range of his palette was remarkable.”

“He was already very advanced and very much his own man,” said Malcolm Peyton of the young composer he taught as an undergraduate.  “It was apparent early that Lee was unique, unlike anyone else,” concurred another teacher, John Heiss.

“He had such an identifiable sound that after studying with him you had to wash it off,” recalled Daniel Felsenfeld, who studied with Hyla for six years while he earned his M.M, G.D. and D.M.A. from the Conservatory. Given the power of this influence, it was all the more commendable that Hyla wasn’t interested in producing a “Lee Hyla School of composers, of devotees,” Felsenfeld said. “He was kind of allergic to that. He told us that we were composers, not Lee Hyla students.”

Just as Hyla’s own compositional style was eclectic and polystylistic, so his studio of composition students was an astonishing mélange of artistic personalities. “It was kind of incredible that three students like Curtis Hughes (who was writing amazing Nancarrow- like works of great experimental complexity), Dan Shore (who was writing musicals”), and I (who was somewhere in between) could all study with Lee,” Felsenfeld said. Indeed, Hyla used to joke about what he called the NEC sound: “'It was like stew thrown up against the wall.’”

But this multiplicity of musical profiles was indicative of Hyla’s strength as a teacher. Whereas previous generations of composition teachers might have aggressively corralled all their students into an accepted musical style, Lee Hyla’s method was to help each individual find the most effective means to articulate what was in his head. “He would ask lots of very pointed questions. ‘Where is this going? What does this mean?  What will happen when this bit ends and another begins?’” said Felsenfeld. “He wanted you to find your own forms that fit your own material.” He also advised students on broadening their musical culture (“He would give me assignments about what other composers to listen to.”) and shaping their careers (He told me I should go to New York, swim in the shark tank. It was a sign of his belief in me. I don’t know if I would have had the courage without his support.”) 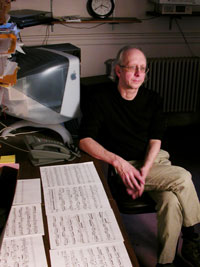 It wasn’t just the compositional life that Hyla modeled. As NEC pianist Stephen Drury put it, “Lee’s enormous gifts as a composer and teacher completely matched every aspect of his deeply human qualities as a person, and they included absolute honesty, devotion (to friends, family, and his craft) explosive energy and unquestionable clarity and vision.”

“Lee was a great soul,” said Gandolfi. “He thrived in the company of his colleagues and students, and always took care to make all feel comfortable and welcomed.  The annual New Year’s Day parties that he and his wife Kate Desjardins prepared at their North End home were legendary.  Each year Lee would travel to New York City to garner all of the best ingredients for a Polish feast.  We so enjoyed gathering with Lee as he greeted us in slippers and lounge wear, and then marveled as he pored over the stove cooking the most delectable cabbage soup while serving up pierogi, kielbasa and other comforting fare.  As always, the topics of conversation were wide ranging: from developments in the contemporary art world to the popular culture of professional baseball; from current events to the latest microtonal tuning systems."

Pianist and NEC faculty Anthony Coleman, whose student years at NEC overlapped with Hyla, recalled “a colleague, an influence, a friend who I always wished to know better. A supporter, whose notes for my CD Lapidation are the best thing written about my work. A man whose love and knowledge of music's manifold riches is reflected both on the surface and inside of the deepest structure of his compositions.” And Coleman fondly recalled “memorable nights filled with Hank Williams, Miles Davis, penny - ante Poker, the board game Diplomacy, Feldman's Last Pieces on the piano, the Great Jones Café...”

Although there will be no funeral for Hyla, plans are in the works for memorial events later in the year in both Chicago and Boston. Details will be announced as they become available. In the meantime, Stephen Drury is dedicating this year’s Summer Institute for Contemporary Performance Practice (June13—21), which was to have featured Hyla as composer in residence, to “Lee’s memory and spirit.” Drury and the Callithumpian Consort will be performing three Hyla works at the concert, June 17, including Basic Training, Migracion, and We Speak Etruscan.

Former students, colleagues, friends and family are invited to share their recollections of Lee which we will post on this website. Please send them to rob.schmieder@necmusic.edu.

The only conservatory in the United States designated a National Historic Landmark, NEC presents more than 900 free concerts each year. Many of these take place in Jordan Hall (which shares National Historic Landmark status with the school), world-renowned for its superb acoustics and beautifully restored interior. In addition to Jordan Hall, more than a dozen performance spaces of various sizes and configurations are utilized to meet the requirements of the unique range of music performed at NEC, from solo recitals to chamber music to orchestral programs to big band jazz, Contemporary Improvisation, and opera scenes. Every year, NEC’s opera studies department also presents two fully staged opera productions at the Cutler Majestic Theatre or Paramount Center in Boston, and a semi-staged performance in Jordan Hall. This past 2013-2014 season, the operas produced were Mozart's La Clemenza di Tito, Monteverdi's L'Incoronazione di Poppea, and Strauss' Die Fledermaus