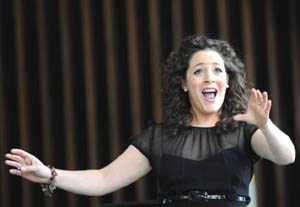 (Connecticut Post photo)NEC soprano Jennifer Caraluzzi ‘11 M.M., a student of Carole Haber, has won the 2010 Jenny Lind Competition for coloratura sopranos sponsored by the Barnum Festival in Bridgeport, CT.  A native of Bethel, CT—the same town from which P.T. Barnum hailed, Caraluzzi won $2000, a concert engagement in Bridgeport, and a two-week concert tour of Sweden along with the winner of a similar competition in Sweden.  The Connecticut competition, now celebrating its 62nd year, pays tribute to the famous Swedish soprano, known as the “Swedish Nightingale,” who was brought to America on tour by Barnum, the great 19th Century showman.  This year marks Barnum’s 200th birthday.

Twelve singers, between 20 and 30 years old, competed in the semi finals.  To determine the winner in the close competition, the three finalists were asked by the judges to take part in a “sing-off.”  Afterwards, Caraluzzi described the tension she experienced: “I’m so excited my legs are shaking,” she told The Connecticut Post. “This was an incredible competition and all the girls were great.  After the first two (finalists) went before me and did so well, I knew I had to be nearly perfect.  But it was so close I wish we all could have won.”

Caraluzzi, who studied at Western Connecticut State University before coming to NEC, has sung operatic roles at Operafestival di Roma, the Bay Area Summer Opera Theatre Institute in San Francisco, Western Connecticut State University and NEC. She is the recipient of the Florence C. Rowe Voice Scholarship.  The soprano can be heard May 3 and 4 in NEC’s Opera Scenes evenings at 8 p.m. in Brown Hall.