Xiang Yu, Stranded in Reykjavik Airport, Relies on Kindness of Strangers to Get to Oslo Competition  Just in Time for First Round

Xiang “Angelo” Yu, a second year violin student at New England Conservatory, has won the 2010 Menuhin Competition for Young Violinists, despite a nerve-wracking trip to Oslo, Norway during which he was stranded in the Reykjavik, Iceland airport because of the volcanic ash cloud. Thanks to the intercessions of a former ambassador to China and Norway who took Yu into his home, the violinist was able to get on a sold-out flight to Norway, sitting in the cockpit with the pilot. He arrived just in time for the competition’s first round and went on to win the finals on Saturday. (See below for Yu's personal account of this odyssey). On Sunday, he was featured in the grand finale concert with the Oslo Philharmonic in the Oslo Opera House. That event was given in the presence of Norway’s King Harald V and Queen Sonja. 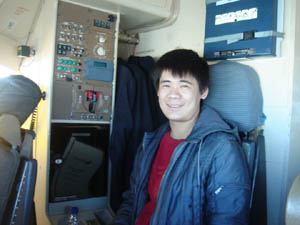 In the cockpitA native of Shanghai, China, Yu studied at the Shanghai Conservatory before coming to Boston to study with Donald Weilerstein, who occupies the Dorothy Richard Starling Chair in Violin Studies. He has won First Prize at the Bode Cup Chamber Music Competition in China and Second Prize at the International Competition for Young Violinists in Honor of Karol Lipinski and Henryk Wieniawski (2006).

Yu has participated in masterclasses at leading international festivals including the Ravinia Festival, Verbier Academy, Morningside Music Bridge, and Yellow Barn Festival. He has given solo recitals in China, Poland, Germany, Canada, Singapore and the US and performed as a soloist with the Calgary Philharmonic Orchestra, the Shanghai Symphony Orchestra and the Young Euro Classic Orchestra. He also serves as Assistant Concertmaster of the Atlantic Symphony Orchestra and this year has appeared as Acting Concertmaster for several performances, including one at NEC's Jordan Hall. 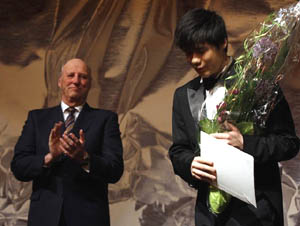 With King HaraldYu wasn’t the only NEC musician among the prize-winners.  Nigel Armstrong, 20, who studied in the NEC Preparatory School and NEC at Walnut Hill program until 2007, won second prize.  He also studied with Donald Weilerstein during his time here.

One of the most prestigious in the world, the Menuhin Competition is designed to spotlight very young performers, with the senior division open to those age 16—21 and the junior division open to those under 16. A peripatetic event, the competition is invited by a host city or a host organization and has previously been held in Folkestone/England, Boulogne-sur-Mer/France, London/England, and Cardiff/Wales. The 2010 edition was jointly hosted by the Oslo Philharmonic Orchestra, the Norwegian Academy of Music, the Barratt Due Institute of Music, the Norwegian Council for Schools of Music and Performing Art, and the Oslo Opera House.

Angelo Yu tells the story of his odyssey to Norway:

"I arrived Iceland on Thursday morning and was going to Oslo from Iceland. However, the volcano erupted and the flight kept delaying. After I stayed at the airport for 12 hours, my flight was canceled and I took 90 minutes just to get to downtown Reykjavik where I  stayed in a hotel. Two days passed, the volcano keep erupting even stronger and I almost gave up all the hopes. There is no ferry from Iceland to Norway, even if there were, it takes more than three days to get there.

The competition decided to delay the first round ONE DAY, but the deadline for the latest performance is Monday afternoon.

One of the competition volunteers happened to know a person in Iceland. The person used to be the ambassador of both China and Norway. So I contacted him and he drove me to his place immediately because at least I would not continue spending money on paying the hotel fee.

He treated me just like his grandson, and letting me stay in his daughter's place. I had a very great time there and thought that even if I couldn't participate in the competition, I should feel happy because I met the most wonderful people in the world.

However, when I got up on Sunday morning (April 18) and checked the website of the airline, I found that a new flight was opened from Iceland to Trondheim (a city in north Norway) because the wind changed direction a little bit that morning so that the ash would not effect the north of Norway.

The new flight was fully booked already because there were so many people who got stuck in Iceland. However, the captain of the flight was a very good friend of the daughter of the ambassador, and she asked if there is any ways that can help me to get to Norway. After thinking for a while, the captain decided to let me sit in the cockpit with him and other pilots!

It was a once-in-a-life-time opportunity for me, and I DID sit with the pilots and flied to Trondheim Sunday afternoon.

After arriving Trondheim, I waited at the airport for a couple of hours and took an over-night bus to Oslo. It took me about 10 hours to get to Oslo and I was not able to sleep at all because of the bumpy road. My host mother in Oslo was such a wonderful lady who picked me up at the central station of Oslo even though it was 5 in the morning! After three hours' nap, I went to the academy, warming up a little bit, finishing all the registration things. All the people in the competition called me "The Iceland Boy." Eventually, I caught the end of the first round and I was the last performer of the day."

Listen to Xiang Yu interviewed on Public Radio International's The World. More on this.

For further information, check out the Strings department on the NEC Website.