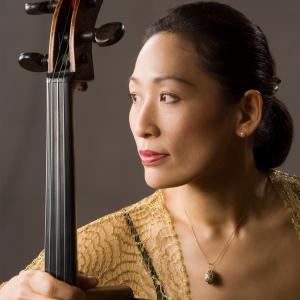 Cellist Yeesun Kim is a member of the Borromeo String Quartet, New England Conservatory's quartet-in-residence. Hailed by the New York Times for her "focused intensity" and "remarkable" performances, Kim enjoys worldwide acclaim as a soloist, chamber musician and teacher. A founding member of the Borromeo String Quartet, Kim has performed in over 20 countries, and in many of the world's most illustrious concert halls and festivals.

Highlights of her 2013–14 season include the world premiere of Lera Auerbach’s String Quartet No. 7, "Désir", performances of the Bela Bartók quartet cycle at the Montreal Chamber Music Festival and in Boston at Jordan Hall, and appearances at the Orquesta Sinfonica de Xalapa Festival in Mexico, the Bermuda Festival of the Performing Arts, and the Terra di Siena Chamber Music Festival in Tuscany. This season welcomes multiple performances with clarinetist Richard Stoltzman, and special collaborations with the Bill T. Jones Dance Company, the Chicago Chamber Musicians, and also with cellist Antonio Lysy in a special multimedia production, Te Amo, Argentina.

Recent highlights include a two-week residency at Suntory Hall in Tokyo to perform the complete Beethoven String Quartets, a cycle of Dvorák quartets at the Isabella Stewart Gardner Museum in Boston, the complete Bartók quartet cycle at the Curtis Institute of Music, performances at the International MIMO Festival in Brazil, the Morgan Library in New York, the Freer Gallery in Washington, D.C., and in Nara, Japan; Beijing and Shanghai, China.

Kim has performed throughout Europe and Asia with the Borromeo, in duo with violinist Nicholas Kitchen, and as a soloist, including engagements with the Philharmonie in Berlin, the Tonhalle in Zurich, the Opera Bastille in Paris, Wigmore Hall in London, the Concertgebouw in Amsterdam, Suntory Hall and Casals Hall in Tokyo, the Saejong Cultural Center in Seoul, Carnegie Hall, the Metropolitan Museum of Art in New York, Jordan Hall in Boston, the Library of Congress and Kennedy Center in Washington, D.C.

A much sought-after chamber musician, she has been invited to perform at many festivals, including Spoleto in the United States and Italy, Ravinia, Marlboro, Santa Fe, La Jolla, Rockport, Music at Menlo, the Prague Spring Festival, the Vancouver Chamber Music, the Stavanger Festival in Norway, the Evian and Divonne Festivals in France, and the Sejong Spring Festival in Korea.

As a member of the Borromeo Quartet since its inception in 1989, Kim has had extensive involvement with NPR's "Performance Today," the Chamber Music Society of Lincoln Center in New York, and the Library of Congress in Washington, D.C. Her radio and television credits also include "Live from Lincoln Center" and numerous appearances on WGBH in Boston, Radio France, and NHK Radio and Television in Japan. Recording credits include Native Informant, featuring music of Mohammed Fairouz (2013), As it was, Is, And will be, featuring music of Gunther Schuller (2011), String Quartets by Robert Maggio (2011), Speak Like the People, Write Like the King, featuring music by Steve Mackey (2009), Soul Garden: The Chamber Music of Derek Bermel (2002), Beethoven: Serioso (2002), and Ravel: String Quartet and Sonata for Violin & Cello (1999).

Kim currently serves on the faculty of New England Conservatory, in the cello and chamber music departments, and teaches each summer at the Taos School of Music in New Mexico. She has also taught at the McGill International String Quartet Academy in Canada, the Suntory Hall Fellows Academy in Japan, at the Seoul National University and National University of Arts in Korea, and for the Foulger Institute in New Jersey .

Kim is a graduate of the Curtis Institute of Music, with advanced degrees from New England Conservatory. Her teachers include Lawrence Lesser, David Soyer, Peter Wiley, Hyungwon Chang, and Minja Hyun.

She plays a Peregrino Zanetto cello, circa 1576, one of the oldest in the world.