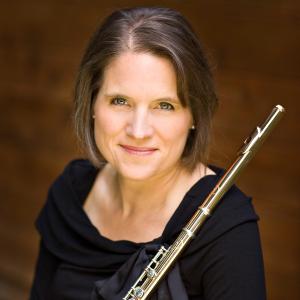 Uncovering the intimate relationship between the best musical expression and movement is Vanessa Breault Mulvey’s mission. A Licensed Andover Educator, she utilizes Body Mapping along with experience in Pilates, Feldenkrais, flying trapeze, and natural movement to guide musicians to move beyond limitation and pain to uncover their true expressive voice.

In 2012 she founded Flying Flutistas with Lynne Krayer-Luke. The duo recognized the trapeze rig was the perfect place to analyze the learning process, learn more about how the body is designed to move, and find real-world strategies for dealing with fear. The Flutistas perform and create music that reaches beyond what audiences expect from two classically-trained flutists.

Mulvey has been a featured performer on concert series around New England including: Wolfeboro Friends of Music, Chromatic Club, King’s Chapel Concert Series, Friends of the Reading Public Library, 1794 Meeting House, Longy SeptemberFest and Faculty Artist Concerts and on WGBH radio. Mulvey is a board member for Andover Educators.

In addition to working with musicians, she has a special interest in applying Body Mapping to fitness and wellness. She is currently developing a movement workshop for musicians to restore energy through movement, and co-teaches an anatomy-infused Pilates class.