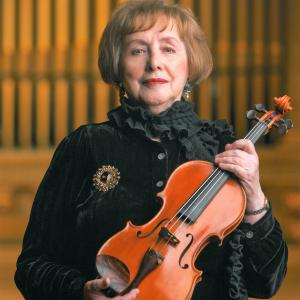 Violinist Valeria Vilker-Kuchment is a member of the Boston Symphony Orchestra. She received her graduate and postgraduate degrees from the Tchaikovsky Conservatory in Moscow, where she was a student of Yuri Yankelevich. Vilker-Kuchment was a prizewinner in a number of international violin and chamber music competitions, including the International Violin Competition in Prague and the International Piano-Trio Competition in Munich, where she was awarded first prize. She has appeared as a recitalist, soloist, and chamber musician throughout the former Soviet Union, Poland, Germany, Czechoslovakia, Italy, and France. As a chamber musician, she has performed with Gil Shaham, Garrick Ohlsson, and Emanuel Ax.

Since coming to the United States, Vilker-Kuchment has performed throughout the country, winning critical acclaim for her appearances in Boston, Washington, and New York's Lincoln Center. Vilker-Kuchment has also been first violin for the Apple Hill Chamber Players, and concertmaster for the Harvard Chamber Orchestra, the Handel and Haydn Society, and the Boston Philharmonic.

Valeria Vilker-Kuchment has been a member of the New England Conservatory faculty since 1981. Her students are members of leading orchestras and chamber groups in the U.S., Europe, and Asia.

In this "BSO at Home" short video, Valeria Kuchment shares the story of how she began to play the violin as a child and performs a movement from Mozart's Duo for Violin and Viola with BSO violist Danny Kim.