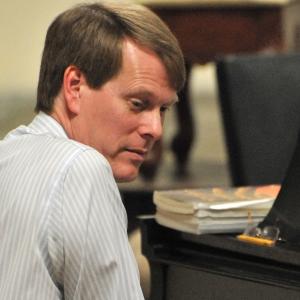 Timothy Steele is an active vocal coach, collaborative pianist, and conductor, and is currently in his twenty-seventh year on the opera faculty at New England Conservatory. He has conducted for outreach tours with the Boston Lyric Opera (more than 200 performances for school children) and is a former music director for Opera Providence, where he led nine productions, numerous concerts, and collaborated with WaterFire Providence on a unique and popular series of opera evenings.

He has served as conductor/assistant conductor/pianist for over 180 operatic productions with 33 companies, including Opera Theatre of St. Louis, Boston Lyric Opera, Boston Symphony Orchestra, Boston Youth Symphony Orchestra, Wolf Trap Opera, Central City Opera, and Opera Maine. He assisted with the Pulitzer Prize-winning opera Madame White Snake for worksops and productions in Boston and Taiwan, and as a part of the Ouroboros Trilogy in 2016. He has premiered numerous operas and song cycles as conductor and pianist, including works by Dominick Argento, Scott Wheeler, Elena Ruehr, Francine Trester, Enrico Garzilli, and Thomas Oboe Lee.

As an audition pianist he has played for thousands of opera auditions and competitions throughout the country, and in concerts he has collaborated with hundreds of singers, instrumentalists, and choirs. He has assisted as recording producer for award-winning recordings by the Florestan Recital Project and Cappella Clausula. An extremely active vocal coach, Timothy has worked with both young singers and seasoned professionals, including Denyce Graves, Bryn Terfel, and James Maddelena.

Currently he is the music director for the Studio Artists program at Opera Maine, the producer of Milton Community Concerts, and the organist/music director at historic First Parish Church in Milton, Mass. In Boston he has performed with Emmanuel Music (where he played for a decade of weekly Bach cantata rehearsals), the Handel and Haydn Society, and the Commonwealth Shakespeare Company, among others.

Timothy received his Bachelor of Music at Drake University in Des Moines, Iowa, and his Master of Music degree in Collaborative Piano from the University of Southern California, where he studied with Gwendolyn Koldofsky.