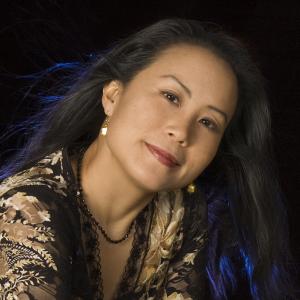 Known for her unique daring performances where she often combines multi-disciplines/genres and media, Sarah Takagi has emerged as an original thinker and performer who is unafraid to redefine, reinvent, and expand the concept of music, identity, and performance in context of innovation and her spiritual practice.

As an award- winning pianist, Sarah Takagi has performed at Carnegie Recital hall, Kennedy Center, 92nd Y as well as on Public Television and Radio and Film.  As a concerto soloist, she has performed over a dozen concerti under the batons of BSO conductors Pascal Verrot and Carl St. Clair among others.  As a chamber musician, she has performed with the NEC Honors Chamber Ensemble, Radius and Chameleon Ensembles as well as with her own Duo PiantiCella with Longy-Bard College faculty cellist Michael Bonner.   Her solo CD “Lavender Bouquet” which offered classical music with Reiki healing energy was the Top Selling Album in 2008.

In 2014, she released “@Play” her first all original improvisation CD recorded live from her solo show with guest artist singer Sarah Rogo.  As an improviser, she has performed on piano and synthesizers with other pianists, singers, dancers, mime, yoga dancer, as well as with interactive fractal images on screen.  In recent years, she has found herself as an improviser beyond her first instrument; improvising as a dancer, actress, singer, and a clown.  In November 2016, she was the featured speaker on Classical Improvisation for New England Piano Teachers’ Association.

In addition to improvising, she has also composed several works for piano and voice including a solo piano piece “Ocean Voices” which was premiered at Roy Barnett Hall at the University of British Columbia for planetary healing conference in 2014.

Most recently, she has crossed genre and medium into singing Jazz. After making her solo debut show at Lilypad with the Lefteris Kordis trio, she has appeared frequently in the Boston area performing with top musicians including Ran Blake, and has been invited to perform with top jazz musicians in Tokyo, Japan, this winter.