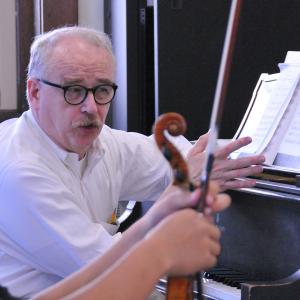 Composer Rodney Lister has received commissions, grants, fellowships, and awards from the Berkshire Music Center (Tanglewood), the Fromm Foundation, the Koussevitzky Music Foundation, the Fires of London, the Poets’ Theatre, the Virgil Thomson Foundation, the MacDowell Colony, the Virginia Center for the Creative Arts, and ASCAP. His works have been performed at Tanglewood, the Library of Congress, the Edinburgh Festival Fringe, and in London, among other places, by performers including Joel Smirnoff, Phyllis Curtin, Michael Finnissy, and the Boston Cecilia.

As a pianist, he has been involved in world, U.S., or Boston premieres of works by Virgil Thomson, Peter Maxwell Davies, Milton Babbitt, Michael Finnissy, Lee Hyla, and Paul Bowles.

Cofounder and codirector of Music Here & Now, a concert series of new music by Boston composers at Boston’s Museum of Fine Arts, Lister was also a founding member of the Music Production Company and music coordinator of Dinosaur Annex Music Ensemble.