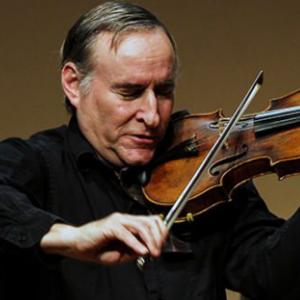 Violinist Peter Zazofsky has enjoyed a career as soloist, chamber musician and educator that spans twenty years and thirty countries on five continents. He has performed with many of the great orchestras in the US and Europe, including the Boston Symphony, the Berlin Philharmonic, Amsterdam Concertgebouw, and the Philadelphia Orchestra, in collaboration with maestros such as Tennstedt, Ozawa, Ormandy, Kurt Sanderling and Charles Dutoit. As a recitalist, Mr. Zazofsky has given innovative programs in Carnegie Hall, Sala Cecilia Meireles in Rio de Janeiro, Palais des Beaux Arts in Brussels and the Teatro Colon in Buenos Aires. He also tours the world's music centers as first violinist of the Muir String Quartet.

Peter Zazofsky was born in Boston, where his father was assistant concertmaster of the Boston Symphony. Joseph Silverstein was his first teacher, and he later studied with Dorothy Delay, Jaime Laredo and Ivan Galamian at the Curtis Institute. Beginning in 1974, Mr. Zazofsky won a series of prizes and awards culminating in the Gold Medal at the 1980 Queen Elisabeth Competition and the Grand Prize of the 1979 Montreal International Competition. (He remains the only American to win this award.) In 1985 he was honored to receive the Avery Fisher Career Grant.

Since then, Peter Zazofsky has made solo appearances with the orchestras of Atlanta, Baltimore, Leipzig, Santiago, Toronto, Minnesota and Montreal. He has toured Asia as soloist with the San Francisco Symphony, as well as the US with the Danish Radio orchestra. He is a frequent visitor to Israel, where he has given over forty performances of concerti, from Beethoven and Sibelius to Bach, Berg and Brahms.

In recent years Peter Zazofsky has added several new facets to his career. He has given premieres of new works written for him by composers in Holland, Belgium, Denmark and Spain, and he recorded concerti by Robert Chumbley and Frederick Van Rossum in Liege, Belgium and Warsaw, Poland. Mr. Zazofsky holds the position of Associate Professor of Violin and Chamber Music at Boston University, and he occasionally serves as a jury member for the violin competitions in Montreal, Brussels, and Odense, Denmark. As first violinist of the Muir Quartet, he has performed many complete cycles of the Beethoven quartets, and has encouraged creation of new works by American composers Joan Tower, Sheila Silver, and Richard Danielpour.