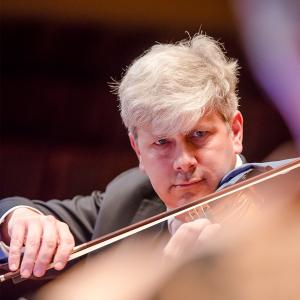 Nicholas Kitchen leads a many-faceted career as violin soloist, chamber musician, educator, video artist, arranger, arts administrator and technology innovator. He is on the Faculty of the New England Conservatory of Music and is Artistic Director of the Heifetz International Music Institute.

Nicholas has performed in many of the world’s great concert halls, including the Berlin Philharmonie, the Concertgebouw in Amsterdam, the Tonhalle in Zurich, Wigmore Hall in London, Suntory Hall in Tokyo, The Oriental Arts Center in Shanghai, the Seoul Arts Center in Korea, the Dvorak Hall in Prague, Carnegie Hall and Lincoln Center in New York and the Library of Congress in Washington. In 1989 Nicholas was one of the founding members of Borromeo String Quartet. The Quartet studied at the New England Conservatory of Music in Boston where the Borromeo Quartet has now been Faculty Quartet in Residence for nearly 30 years. The Quartet has also for nearly 30 years presented cycles of string quartets - Shostakovich, Dvorak, Mendelssohn, 2 Beethoven Cycles to mention a few - at the Isabella Stewart Gardner Museum. Nicholas has also taught frequently for ProQuartet in Paris and given lectures on Beethoven manuscripts at Tanglewood and Ravinia as well as UCLA, the Colburn School, the Basel Conservatory and the Library of Congress. The Borromeo Quartet was ensemble in residence for NPR’s Performance Today, and also worked extensively with the Chamber Music Society of Lincoln Center in New York. With the Borromeo Quartet Nicholas received top prizes in the Evian International Quartet Competition, received the Cleveland Quartet Award, the Avery Fischer Career Grant and the Martin E. Siegel Award. The Borromeo Quartet also were winners in the Young Concert Artist Awards. Nicholas was a Presidential Scholar in the Arts and received the Albert Schweitzer Medallion for Artistry.

Nicholas has been active expanding the repertoire for string quartet arranging Bach’s Well Tempered Clavier Books 1 and 2 for string quartet as well as the Goldberg Variations and numerous organ works. He has also transcribed for string quartet music by the great jazz pianist Bill Evans. Nicholas has created programs for school children to learn about the structure of classical music and combine it with techniques of animation and film making. In these programs the students create a video which is eventually shown in synchronization with live performance. Nicholas created and supervised a program called MatheMusica for KidZNotes in Durham, North Carolina funded by the North Carolina Arts Council. This program teaches mathematics, science and music in an integrated curriculum. Nicholas has been an innovator in the use of technology, pioneering the use of homemade USB page-turning pedals in order to always read from the complete score. This has lead often to the opportunity to read from the composer’s manuscript, stimulating Nicholas' work with Beethoven manuscripts.

In 2003 Nicholas founded Living Archive which for many years allowed audience members to order CDs and DVDs of the concerts they had just attended. Presently Living Archive is reconstituting itself to become a music learning website featuring media from live performance. Living Archive recently released the Borromeo Quartet's recording of Book 1 of the Well-Tempered Clavier of Bach

Before the Heifetz Institute, Nicholas was Artistic Director for the Cape Cod Chamber Music Festival for six years. Nicholas grew up in Durham, North Carolina where his mother teaches violin and founded and directed the Duke University String School. His father, a pianist and organist and Duke math professor, has run, for nearly 50 years, the extensive music program of St. Stephen’s Episcopal Church.